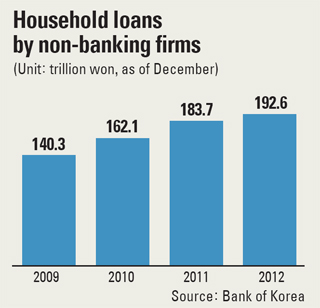 According to the central bank, total household loans by savings banks, mutual financing companies and other non-banking institutions stood at a total of 192.6 trillion won ($172.8 billion) at the end of December. That is an increase from the 162.1 trillion won reported at the end of 2010.

Concerns, meanwhile, are growing that the increase in higher-interest loans extended by non-banking institutions will make it more difficult for the country to address snowballing household debt problems. Interest rates are typically about three times higher than those of banks.

Some experts say a reason for the surge in nonbanking household loans is the tougher regulations on bank loans imposed by the government in 2011. Since it has become more difficult for those in the poor credit group to borrow money from local banks, they have turned to the nonbanking sector.

Curbing household debt was a major task of the former Lee Myung-bak government and it is also an issue for the Park Geun-hye administration. During her presidential campaign last year, Park promised various measures to help mainly low-income households and those with poor credit. She pledged to launch a “people’s happiness fund” to address household debt problems by writing down overdue debts by a maximum of 70 percent. Specifics of the plan are being discussed by the Financial Services Commission, the country’s financial regulator.

“The stricter regulation we imposed in 2011 was to protect those with poor credit because it is important to lend them money so they are able to pay it back,” said an official from the FSC.