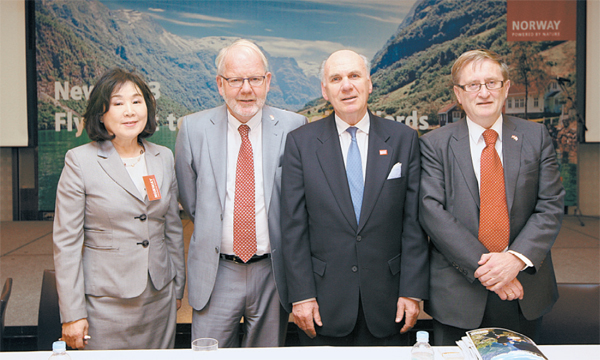 The Norway Tourist Board has announced that KAL will be the first Korean airline to offer direct flights between Seoul and Oslo.

With a flight time of 13 hours from Incheon to Norway and 11 hours and 30 minutes on the return, the service will commence May 25 and operate each Saturday until June 22. Future schedules have yet to be determined.

“Koreans are the second-largest group of Asian tourists to Norway, after the Chinese. So the direct flight is remarkable because it reflects growing interest and demand,” said Holthe.

“More broadly, it will bring mutual development to both countries in the long run by fostering more cultural and commercial exchanges,” he added.

Even though Germans constitute the largest number of tourists in Norway, followed by Danes, Swedes and Dutch, “we focus on attracting tourists from Asia because it’s a fast-growing region,” said Holte.

Demand is expected to grow for flights between Korea and the Scandanavian capital as the two countries increase their economic cooperation.

“South Korea and Norway can have mutual benefits because we have many sectors to cooperate,” said Bjornsen, the commercial counselor. “The sectors include environment, energy and shipping industry. Korea was the largest supplier of ships to Norway last year.”