Pastor is applauded by Syrians for charity efforts

Pastor is applauded by Syrians for charity efforts 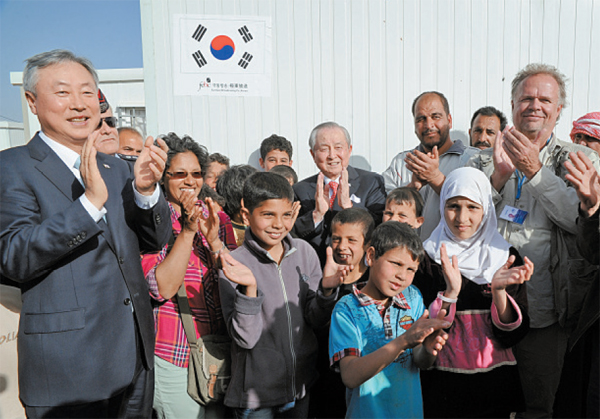 Pastor Kim Jang-hwan (center) attends an event on March 13 at the Zaatari camp in Jordan in commemoration of a humanitarian housing project he led for Syrian refugees living there. [NEWSIS]

ZAATARI, Jordan - Lined with endless rows of dusty tents, Zaatari Refugee Camp in Jordan portrays how bitter a civil war can be.

The bleak tent camp on a hot, barren plain in the desert a few miles south of the Syrian border is home to some 120,000 Syrian refugees who fled the ongoing conflict in their homeland.

Most of them turn up exhausted, hungry and haunted by the terrifying sounds of bombings and bloodshed. But in a rare moment of celebration, a group of the refugees felt uplifted when Pastor Kim Jang-hwan visited the refugee center on March 13 for a ceremony to commemorate the donation of 400 prefabricated container homes.

The donation drive was led by Kim, who raised 1.7 billion won ($1.5 million) in Korea to establish the housing in the Jordanian camp. The Korean Embassy in Jordan and the Korea International Cooperation Agency helped implement the project, which finished in February.

The residents of the container housing - each stamped with the words “Korean Village” - reportedly asked for an event to express their gratitude.

“When I visited Jordan in January, I was shocked by the horrendous conditions at the refugee camp,” said Kim, who also serves as director of the Far East Broadcasting Corporation’s Korean Christian radio.

“Torrential downpours flooded the tents built by the United Nations, and some of them were actually submerged,” he recalled.

The refugee camp is prone to a number of natural disasters and prefabricated houses are generally safer and more comfortable than typical camp dwellings. But the cost is prohibitive, as each costs 3.5 million won - out of reach for the vast majority of the 120,000 refugees.

During Kim’s latest visit, he pledged to build an additional 1,000 containers with the help of SK Group.

His humanitarian efforts appear to have enhanced Korea’s image. At the event, a throng of the Syrian refugees chanted “Korea” with their thumbs up in support of Kim.

“The most important thing is that Korea provided homes for us and we now live here,” said an 11-year-old Syrian girl with a bright smile.

Shin Hyun-suk, ambassador to Jordan, attended the event along with police and UN officials.

Kim said his contribution was linked to Korea’s own past as a war-ravaged country after the 1950-53 Korean War.

“Korea was also reduced to rubble after the Korean War,” he said. “I think now Syria is in the same situation as Korea was in the 1950s. I feel as if I am returning a favor we received during hard times.”