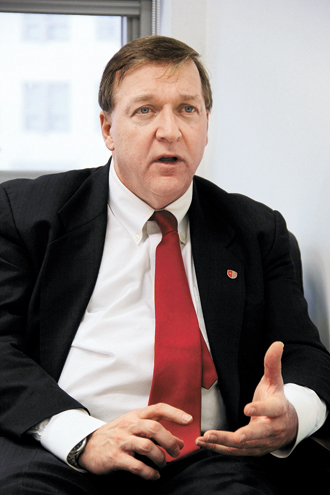 SONGDO, Incheon - As the first overseas university that opened in Korea, the State University of New York, Stony Brook welcomed its first undergraduates at its Korean campus in Incheon during an opening ceremony last week.

Located within an international business district some 40 miles from Seoul, the school is funded by the Ministry of Knowledge Economy, the Incheon Free Economic Zone and the Incheon Metropolitan Government.

The development is part of a $35 billion effort by the Korean government to form an international business district that houses competitive universities from around the world.

Along with the 27 undergraduates majoring in technological system management, a handful of prominent figures - Incheon Mayor Song Young-gil, Kim Chun-ho, president of the Korean campus, and Lee Jong-choel, commissioner of the Free Economic Zone - attended the ceremonial event.

Among them was also Samuel L. Stanley, president of Stony Brook University in New York. He has been at the forefront of establishing an overseas branch of the university.

The Korea JoongAng Daily sat down with the president to discuss SUNY Korea’s vision and its goal for Korean students.

Q. What are short-term and long-term goals of the SUNY Korea campus?

A. The short-term goal is to establish the first American university able to operate on Korean soil. It basically means we need to get it started. It’s not easy to get done, but we’ve done it with help from the Ministry of Education, Science and Technology.

The longer-term goal is being a key contributor to the Songdo Global University Campus. The project has a very powerful vision, the concept of bringing in some of the world’s leading universities, having them establish their campuses in Korea and encouraging them to teach some of the things they are best at. So to me, it was a very exciting vision, and it’s really up to us to fulfill that. Implementation is going to be challenging, but we have a great facility and great partners to help us do that. The Korean government has been incredibly supportive, and now we have to make sure that we attract students not only from Korea but from Asia and hopefully from around the world. In doing so, we’d like to be part of Songdo’s great vision.

Does the semester here match that of Stony Brook’s campus in the United States? What about the faculty?

Yes, SUNY Korea’s academic calendar is identical to that of the New York campus. As for the faculty issue, it’s kind of a combination. We have professors who have come from the U.S. campus and we also have professors from Korea. We now have around 10 faculty members, and given that we start with relatively small number of students, we have a very good faculty-to-student ratio.

Which fields from Stony Brook will be the focus of SUNY Korea?

Stony has a great reputation in what we call STEM - science, technology, engineering and mathematics. Those are real strengths for us. One of the ideas when starting the global university project is that each university needs to offer courses on what they are strong at. So for the time being, we are going to focus on science and engineering.

Only some of your university’s courses are available in Korea. Do you have any plans to increase availability?

Yes, we plan to propose additional majors available in Korea to the Ministry of Education in 2013. We’d like to propose two bachelor degrees in computer science and information systems, one masters program and one PhD - both in mechanical engineering.

We have one major, technological system management, in the undergraduate program and four for graduate degrees, which are a master’s degree in technological system management and computer science, and PhD programs in technology, policy and innovation and computer science. All the courses have a great reputation in the U.S., but we also have great faculty in the arts and humanities. If Songdo and our students want us to expand, we will do that. We can collaborate with the ministries as well as other recognized universities.

But on the other hand, the key concept of the Songdo project is bringing some of the best programs into Korea. Obviously, other universities will come with their strengths, and we don’t want to duplicate others’ offerings.

SUNY Korea students will have more options in the course offerings when they come to Stony Brook in New York for a year as part of a mandatory exchange program. There, they can take more diverse courses.