Puerto Rico sinks Japan to move on to WBC final

Puerto Rico sinks Japan to move on to WBC final 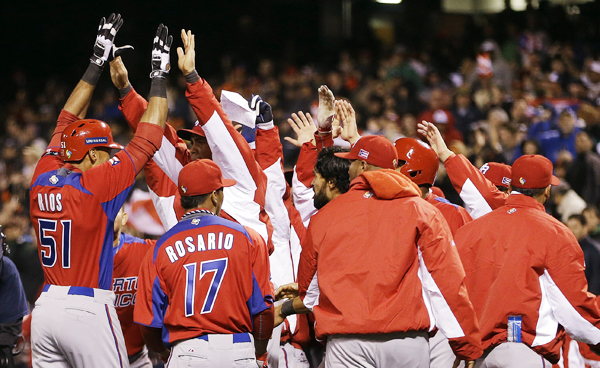 Puerto Rico’s Alex Rios (51) celebrates with teammates after hitting a two-run homer against Japan during their semifinal World Baseball Classic game in San Francisco, Sunday. Puerto Rico advanced to the final with a 3-1 win. [AP/NEWSIS]

Now, Puerto Rico needs one more win to be WBC champion. Then, the country can really cheer.

“We totally showed we can be the new team, the champion nobody expected,” said Angel Pagan, center fielder for the World Series champion San Francisco Giants. “It means a lot, but not everything, because we’re still missing one more win.”

Rios hit a two-run homer, Mike Aviles singled twice and drove in the game’s first run, and Puerto Rico reached its first WBC final with a big assist from the bullpen.

Relievers Jose De La Torre and Xavier Cedeno each worked out of jams while pitching key moments after winning pitcher Mario Santiago left in the fifth inning with a forearm injury.

Puerto Rico will play in Tuesday night’s championship against either the Netherlands or the Dominican Republic.

Aviles hit a two-out bloop single to center to put Puerto Rico on the board in the first and singled again to start the seventh before Rios hit a towering drive into the left-field seats.

Unlike the two previous WBC winners from Japan, this team was devoid of major leaguers and couldn’t pull off a three-peat. Hirokazu Ibata drove in the team’s lone run with an eighth-inning single against Randy Fontanez, but Japan missed a chance with a costly baserunning blunder. It also had the tying run at the plate in the ninth but Fernando Cabrera closed out the win.

Team Puerto Rico eliminated the star-studded U.S. team with a 4-3 victory Friday in Miami and then sent Japan home empty-handed for the first time in the event’s short history.

The Puerto Ricans already had rallied from a 3-0 deficit against Italy last Wednesday to stay alive. Puerto Rico has beaten Japan in three of their four international meetings.

The team will play the winner of the other semifinal between the Dominican Republic and the Netherlands for the WBC title. AP