GS Caltex retakes No. 1 in upgrading

GS Caltex retakes No. 1 in upgrading 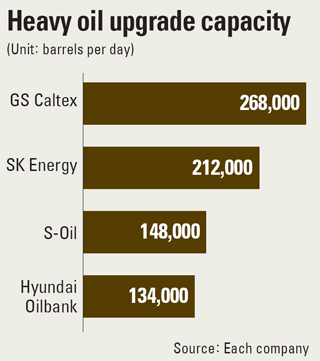 GS Caltex, a joint venture of GS Holdings and U.S. oil company Chevron, has pushed to set up high quality heavy oil upgrading facilities since 2004, investing a total of 5 trillion.

GS Caltex first claimed the title of No. 1 in May 2011 with completion of its third heavy oil processing plant, but just four months later Hyundai Oilbank took the top position.

“Our Yeosu plant is an important step toward become a world class oil producer,” the company said. “We will seek to export our products and increase our ability to adjust to changes in demand in global oil market.”

According to Korea Petroleum Association, exports of petroleum products were valued at $56.2 billion last year, more than any other sector including semiconductors, machinery and automobiles.

Petroleum products accounted for more than 10 percent of the value of all exports, according to the association’s data.