Galaxy S4 could be a wake-up call

Galaxy S4 could be a wake-up call 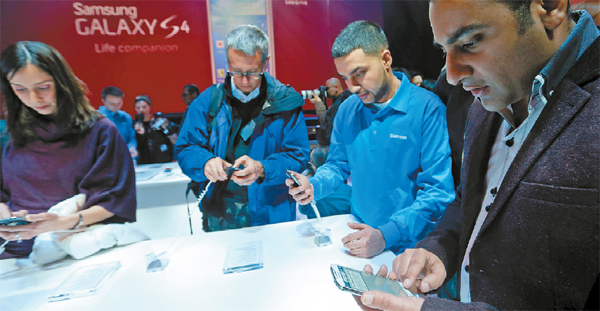 The Galaxy S4, armed with the best-ever display, processor and camera of any Samsung phone, was unveiled Thursday in New York and its sales are expected to begin here next month. But given the precedents, it is highly likely the majority of consumers will take a wait-and-see attitude instead of snatching the flagship Samsung phone from stores right after its release, given the precedents.

Such an abrupt plunge came as three mobile carriers - SK Telecom, KT and LG U+ - scrambled to lure more customers with subsidies beyond the legal ceiling of 270,000 won. Earlier this month, some online stores were even spotted selling the S3 for 1,000 won on condition that buyers comply with conditions such as a minimum two?year subscription period and fixed monthly bill of 72,000 won.

Galaxy S4’s retail price in Korea is estimated to be cheaper than its predecessor given that a GSMArena, a U.S. IT review site, last Saturday forecast it will cost $579. Even so, many Korean consumers appear cautious about purchasing the new model: Past drastic pricing tactics may have pumped up the sales, but they could boomerang this time.

“Anyone with common sense would wait for the [S4] price to fall,” said Kim Yoon-soo, a 34-year-old office worker who bought the S3 at its initial retail price. “I have observed the price nose dive in the past months and some others buy it for almost free. But I still have to pay tens of thousands of won in monthly installments for the machine for the next 16 months.”

“The S3 case not only gave those users who have been loyal to the Samsung brand a sense of deprivation, but also put a long-lasting stigma on Samsung,” writes a widely recognized Korean tech blogger known as Vierge.

The top telecom watchdog Korea Communications Commission late last year adopted a punitive measure forcing carriers to pay up to several billion won in fines for having waged such a frenzied subsidy battle and to consecutively suspend them from attracting new customers for up to 24 days from Jan. 7 through March 13.

Although mobile carriers have repeatedly kept a low profile when the government’s grip tightens and then resume activities to mobilize more subscribers, this time may be different.

The Blue House hinted at the senior secretary meeting last Wednesday that it would come up with measures to “root out excessive subsidies” offered by mobile carriers - a highly unusual move because the meeting normally discusses political matters.

The next day the Korea Communications Commission slapped additional fines on the three carriers for illegal subsidies during the period from Dec. 24 till Jan. 7. The combined fines amount to 5.31 billion won, with SK Telecom forced to pay the most at 3.14 billion won, followed by KT at 1.61 billion won and LG U+ at 560 million won.

Still, some maintain rosy prospects for the Galaxy S4. “Controversies over Galaxy S4 are rampant, but what’s certain is that it will be unleashed starting in late April across 155 countries around the world and no competitor strong enough to contain S4 is in sight,” said Lee Seung-woo, an analyst with IBK Investment & Securities, in a report.

The S2 posted accumulated sales of 40 million units and the S3 70 million, and now many analysts, including Lee, predict the S4 will sell more than 100 million units. Galaxy S3 domestic sales accounted for a mere 10 percent of the unit’s global sales, the S4’s performance in Korea may not be such an enormous deal for Samsung.