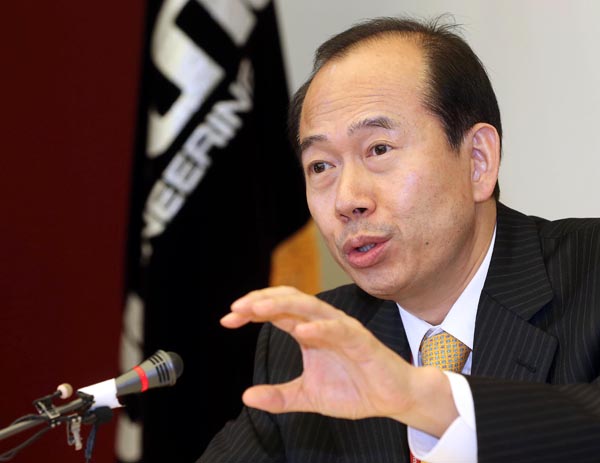 Hwang Chul-joo appears at a press conference yesterday after deciding to abandon his nomination for head of the Small and Medium Business Administration. By Kang Jung-hyun

A successful businessman nominated by President Park Geun-hye as her point man to oversee policies on small- and mid-size enterprises abruptly withdrew yesterday due to concerns about his personal assets.

Hwang Chul-joo, CEO of Jusung Engineering, said he no longer wanted to lead the Small and Medium Business Administration since he would be required to relinquish control over his company.

Under the Public Service Ethics Act, a senior public servant owning shares worth more than 30 million won ($26,913) in a company that could pose a conflict of interest must sell the assets either directly within a month or through a blind trust within 60 days.

“I misunderstood the requirement regarding the blind trust,” Hwang said. “I thought I needed to put my shares in a blind trust during my tenure as a civil servant and then could regain the assets after leaving my post.”

Hwang owns a 25.5 percent stake in Jusung Engineering worth about 69.5 billion won, and his wife owns a 1.8 percent stake.

“I respect the law, but in the market of free competition, disposing a stake that include management rights within two months is unacceptable,” Hwang explained.

He also said it would be irresponsible as a businessman to do so, taking into account investors and workers at his firm.

While he offered an apology for stirring up trouble, he urged that the current system be changed.

“If the requirement remains, will any businessman agree to serve in public office or work for the country?” he asked.

The founder of a company that produces flat-panel displays, semiconductors and solar cells seemed to be a promising candidate for the post when his nomination was announced on Friday.

But once the situation turned sour, the Park administration once again drew criticism for botching an appointment, perhaps by failing to brief Hwang properly on the requirements of the job.

“Hwang expressed his desire to give up the post, so we asked him why,” a Blue House official said. “He explained that he didn’t fully understand the ethics requirements. We thought we gave him a proper explanation, but he probably didn’t pay close attention.”

Hwang’s account seemed to put the blame on poor communication.

According to Hwang, he agreed to background checks on Thursday and was formally notified about the appointment on Friday afternoon. At the time, he said he was told briefly about the requirement to dispose of his stake in Jusung Engineering.

Hwang said he then asked his company’s legal office to look into the issue on Friday evening, but by the time he was informed in more detail about the problem on Saturday morning, the Blue House had already announced the nomination.

Alarmed by the situation, Hwang informed the Park administration on Saturday that he could not accept the offer given the current conditions and asked to find a way around the regulations. When the Blue House said yesterday that there could be no exceptions, Hwang decided to withdraw.

While the Blue House gave no official comment on the situation, criticism grew that the situation was a disaster waiting to happen. Hwang is the ninth appointee to either withdraw from the nomination process or be replaced abruptly since Park created her transition team.

The first was Choi Dae-suk, who served on the unification subcommittee of the transition team but departed mysteriously.

Park’s initial nomination of Kim Yong-joon as prime minister was also botched as Kim withdrew after media uncovered a series of allegations surrounding his wealth and his sons’ draft-dodging.

Since Park’s inauguration, the Blue House also retracted nominations of five presidential secretaries after naming them but gave no explanations.

After her presidential victory, Park promised to create a personnel affairs committee supervised by the presidential chief of staff to vet top government officials. Although the committee is reportedly in operation whenever a major appointment is made, a senior presidential official said he doesn’t know who its members are.

“The latest case is the evidence that personnel are being appointed in a top-down manner from the president,” said Kim Hyung-joon, a professor of political science at Myongji University. “The vetting system is not working properly.”