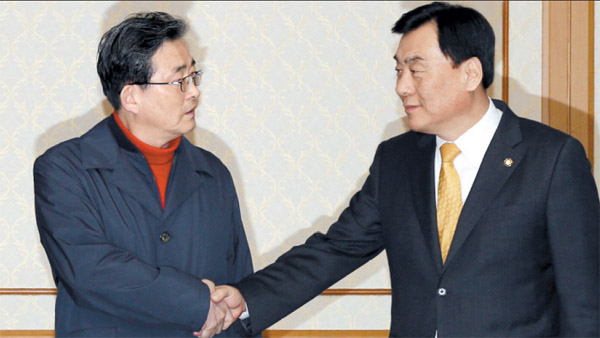 The ruling Saenuri Party and the main opposition Democratic United Party agreed on the specifics of the government restructuring plan, and a package of bills to implement it will come up for vote at the National Assembly’s plenary session on Wednesday.

The agreement came 47 days after the bills were submitted by the Saenuri Party to the Assembly and 21 days since the Park administration began.

“President Park expressed her appreciation to the National Assembly for reaching an agreement on the government restructuring plan,” said Kim Haing, a Blue House spokeswoman. “She also said the government and the ruling and opposition parties should cooperate to empower the Ministry of Future Planning and Science to revive our economy and create jobs.”

The ruling and opposition parties disagreed over Park’s plan to create a ministry to integrate information, communications and technology policies. The DUP particularly opposed the idea of giving the ministry oversight of the broadcasting industry, arguing that such a move would undermine the integrity of broadcasters.

At negotiations yesterday, the floor leaders and deputy negotiators of the two parties agreed that the Ministry of Future Planning and Science will be in charge of Internet-protocol television and the system operators for cable and satellite television.

The ministry still needs to obtain approvals from the Korea Communications Commission to revise relevant regulations and issue business permits, according to the agreement.

To ensure broadcasters’ neutrality, the ruling and opposition parties agreed to establish a special committee on the issue in the March legislative session. The committee will be composed of an equal number of members from the Saenuri Party and the DUP. It will be chaired by the opposition DUP during its six-month term.

In return for the DUP’s concession on the government restructuring bills, the Saenuri Party agreed to allow a National Assembly investigation into the National Intelligence Service’s alleged intervention in the presidential election after the prosecution completes its own probe of the case.

The two parties also agreed on other pending issues and announced the outcomes.

Among the additional agreements is a pledge to reform law enforcement authorities via legislation before the end of June. Plans include introducing a special inspector to investigate crimes committed by top government officials, operating a permanent independent counsel and shutting down the powerful Central Investigation Unit of the Supreme Prosecutors’ Office.

Progress on the pending issues picked up after Park met with ruling party leaders on Friday and told them to use their discretion in negotiations with the DUP.

Park’s transition team announced a plan to restructure government ministries on Jan. 15, and the Saenuri Party submitted bills on Jan. 30.

The president stood firm in the face of DUP opposition even when it lasted beyond her inauguration on Feb. 25. She issued a special address to the nation on March 5 to pressure the DUP.