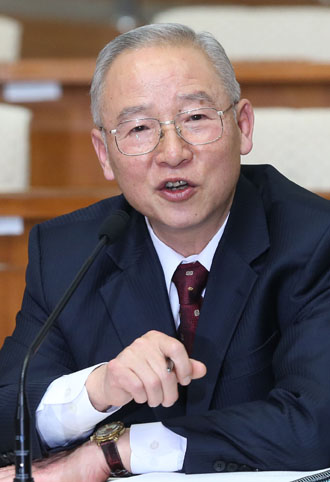 Nam Jae-joon, a 68-year-old former Army chief of staff who has been tapped to lead the National Intelligence Service (NIS), said yesterday at his parliamentary confirmation hearing that the main task of South Korea’s spy agency is to strengthen the country’s security posture in the face of mounting threats from North Korea.

“The single most important mission for the NIS is to firmly establish readiness to cope with security risks,” he told lawmakers at the National Assembly. He made clear the agency, if he is appointed, will do its utmost to meet the requirements of the present circumstances and wishes of the people.

The nominee for head of the nation’s spy agency was grilled by lawmakers at his confirmation hearing yesterday, mostly on his ethics and political opinions.

The retired general, who has served as deputy commander of the South Korea-U.S. Combined Forces Command, attended the one-day hearing at the National Assembly as the nominee to lead the National Security Service, one of the nation’s four most powerful positions along with the chief of police, the prosecutor general and the tax agency head.

The hearing was supposed to be two days long, but ruling and opposition lawmakers agreed to make it a single day.

Kim Hyun of the Democratic United Party questioned his qualifications as spy agency head, which would require him to deal with domestic and North Korean affairs, when his career has mostly been in the military.

“When I was chief of [army] operations, I handled information on North Korea specifically,” Nam said.

Kim also asked him a sensitive political question commonly brought up at such hearings - how he feels about the May 16 coup d’etat by former military strongman Park Chung Hee, the father of President Park Geun-hye.

Nam said, “As an individual who lived through that era, I say the May 16 coup was a coup.”

But he added, “I think [the coup] led to industrialization and prosperity for the nation by consolidating the desire of the people to live a better life.”

When Cho Myung-chul, a defector-turned-Saenuri lawmaker, asked whether he would dedicate himself to serving the current administration or the country, Nam said, “A civil servant and solider must serve the nation, not an administration,” suggesting he will maintain political neutrality in his job.

Meanwhile, the left-leaning Hankyoreh newspaper reported yesterday that the outgoing NIS Chief, Won Sei-hoon, allegedly got involved in domestic politics during his term by ordering agents to sway voters in favor of ruling party candidate Park Geun-hye ahead of the presidential election and to rally support for the Lee Myung-bak administration.

The NIS released a statement refuting the allegation, saying that the paper “distorted proper orders and activities into political intervention.”

Won had ordered NIS officials to keep their political neutrality and be cautious with their words and comments, particularly during election season, the statement said.

Still, the agency said it is true that Won ordered agents to “respond actively to the reality that some North Korean spies and pro-Pyongyang people are protesting against the government and producing and spreading groundless rumors through the Internet.”