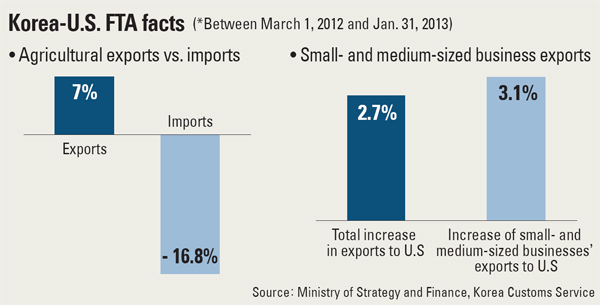 On Friday, the Korea-U.S. free trade agreement celebrated the one-year anniversary of its hard-fought ratification that came only after years of controversy and protests.

But many of the greatest concerns such as fear of the collapse of the agriculture industry due to cheaper U.S. produce or problems for small businesses have faded in the last 12 months.

Before the ratification of the Korus FTA in 2011, Kim Cheol, a 24-year-old office worker, worried for his grandfather, who farmed rice and vegetables for a living in the countryside. Kim was concerned that local farmers like his grandfather would stand no chance against competition from the United States. But one year later, Kim thinks differently.

“Right before the Korea-U.S. FTA came into effect, my grandfather began growing tomatoes through government subsidies and is currently raising more income,” he explained.

In the last year, the agriculture food industry has seen exports to the United States grow by 7 percent, and in contrast, imports decreased by 16.8 percent, according to the Ministry for Food, Agriculture, Forestry and Fisheries, partly because U.S. corn production was devastated because of a drought.

Amid fierce protests, the ruling Saenuri Party railroaded the free trade agreement through the National Assembly on Nov. 22, 2011, leading to a rocky start for the trade pact on March 15, 2012.

“As the Korus FTA became effective, I was very worried because of rampant exaggerations such as the agriculture industry collapsing or medical fees rising drastically,” said Choi Yong-sang, 26. “But looking back, exaggerations are exaggerations.”

Mrs. Lee, a 41-year-old homemaker, was alarmed by rumors that drug costs would skyrocket, appendicitis surgery could cost up to 9 million won ($8,072) and the National Health Insurance would exist in name only.

Her mother-in-law suffered from various conditions including diabetes, high blood pressure, osteoporosis and cardiac problems, and she feared that hospital fees would jump as the free trade agreement allowed for-profit hospitals.

But there has been no significant increase in medical costs. Rather, the cost of drugs covered by medical insurance dropped by an average of 14 percent because of medical policies implemented by the government last April.

Kim Young-jin, 45, a connector manufacturer in Cheonan, South Chungcheong, said, “In the beginning, there were many forecasts stating that it would become more difficult for small- and medium-sized businesses.”

Thanks to the reduction of tariffs from the trade agreement, however, his company was able to win a contract with the U.S. government.

Contrary to anxiety that the trade pact “would only line the bellies of large corporations and bankrupt small- and medium-sized businesses,” exports for smaller businesses increased by 3.1 percent this year, higher than the total increase in exports to the U.S. at 2.7 percent.

Likewise, there have been zero reported cases of mad cow disease in humans, and likewise, no imports of U.S. beef over 30 months old.

Thus far there have been no cases of the Korean government being sued by a U.S. company under the free trade agreement, but there are still talks of renegotiation.

And of course, there are observers choosing to remain cautious as they await more information about the FTA’s effects as time passes.

“Imports and exports of agricultural products depend on many factors including weather and disease and therefore fluctuate a lot,” said an Agriculture Ministry official.