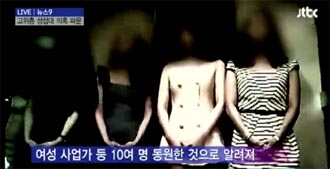 A number of former and incumbent high-ranking government officials and other public figures have been implicated in a widening police probe into a sex-for-influence scandal. A building contractor being sued by his investors is said to have provided women for the other people under investigation, who include the head of a hospital and influential men in the financial industry. There are also reports that everything was recorded on video.

The National Police Agency announced its investigation yesterday, adding that the preliminary probe will become a full-fledged investigation if the allegations against the contractor, whose identity is being withheld, are confirmed.

Police believe the 51-year-old contractor used sexual entertainment services to bribe influential people over two years from late 2009 at a vacation home in Wonju, Gangwon. About a dozen women provided sexual services to the guests at the villa, authorities said.

The women are not prostitutes, but run the gamut from housewives to artists and businesswomen. Their motives for providing sex are as yet unknown.

Those allegedly entertained by the women in return for using their influence to help the contractor’s business have not been identified; only their occupations have been confirmed.

News reports have been circulating that there are videos showing intimate rendezvous between the powerful guests and the women, but police have yet to confirm such accounts.

“We just initiated the preliminary investigation and haven’t discovered the rumored video files,” said a detective involved in the case who requested anonymity.

The scandal began to gather steam last November when a self-employed woman (whose identity is also being withheld) filed a charge of sexual assault and blackmail against the contractor. She claimed he drugged and sexually assaulted her, and recorded the whole thing.

The woman alleges that he then blackmailed her with the video file to extort 1.5 billion won ($1.34 million) from her as well as her imported luxury vehicle. She also told police that she was threatened with an air rifle and a samurai-style sword.

The police looked into the woman’s claim last year only to drop all charges against the contractor except for one of possession of an unregistered weapon - the rifle.

What would have ended as a minor case took a turn when the woman reportedly discovered other video files featuring the sexual encounters between the other men and women.

Though police denied yesterday they have seen the videos, it is reported that they have already contacted some women said to be shown in the videos. The testimony collected is said to be consistent with regards to the people the women provided sex for and other details of what went on at the Gangwon home.

Police suspect that the contractor, who investors allege embezzled 7 billion won, was trying to find a way out of the quagmire by lobbying influential people.

“We will look into irregularities found in the suspect’s business as a first step as well as the allegations being raised,” said a high-ranking police official overseeing the case.