Seo closes the book on his career

Seo closes the book on his career 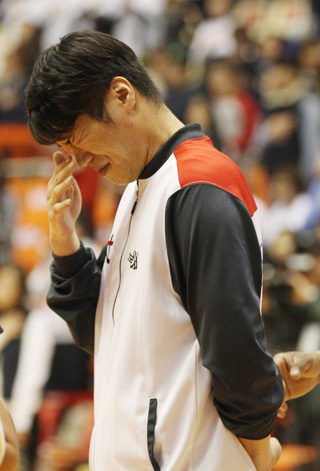 Seo Jang-hoon said yesterday that he should have achieved more, as Korea’s all-time leading scorer bid a tearful adieu to basketball fans.

“I have lingering regrets over every moment. I think I should have done better,” Seo told a media conference in Busan. “I came up too short of your expectations,” he added, choking up.

The press conference was held before his team, the Busan KT Sonicboom, had its final game of the season against the Jeonju KCC Egis.

The six-foot-eight (207-centimeter) center has long said that he would retire after the 2012-13 season. The Seoul Samsung Thunders rounded out the six-team playoff last Friday, dashing the Sonicboom’s hopes of advancing to the postseason. Before yesterdays’ game, the Busan club was tied for eighth with the Changwon LG Sakers.

Before the final game, Seo, 38, had scored 13,198 points, a record that will unlikely be broken for years. Choo Seung-kyun, who retired from the KCC Egis last year after a 15-year career, is a distant runner-up to the record with 10,019 points.

Among active players, Kim Joo-sung of the Wonju Dongbu Promy is closest to Seo. Kim, 33, who is in his 11th season, has scored 8,076 points.

Seo averaged more than 19 points and seven rebounds per game throughout his 15-year professional career. He led Korea to a gold medal over China in the 2002 Beijing Olympics, earning the nickname “National Treasure” center. His departure leaves another hole in a Korean basketball world already reeling from a game-fixing allegations surrounding star player-turned-manager Kang Dong-hee.

Seo expressed sadness about the scandal, but declined to comment on it further, saying, “I’m sorry that this kind of thing happened at a time when I’m leaving basketball.”