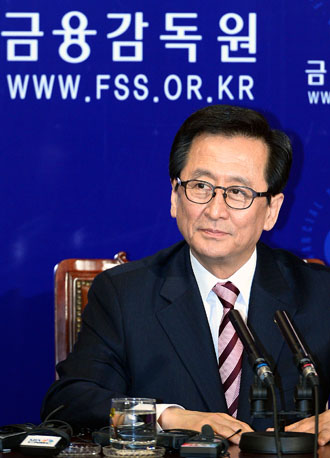 As Choi Soo-hyun, newly appointed chief of the Financial Supervisory Service, walked into the press room yesterday, he seemed determined to lead the financial watchdog during a time of administrative change within the industry.

In the morning, Choi delivered his first speech as FSS governor to employees, mainly focusing on enhancing policies and programs supporting ordinary and low-income households and also small- and mid-size businesses. He officially took office yesterday.

“I will spare no support for ordinary people and those in the vulnerable social group that have been isolated from the financial system, so that they are able to [financially] stand up by themselves,” Choi said. “I will expand so-called ‘financial welfare’ by embracing the disabled, North Korean defectors and multicultural families.”

He stressed the importance of small- and medium-sized businesses. “Policies will be promoted to help save small businesses and the self-employed,” he said.

Choi’s financial policy direction is in line with President Park Geun-hye’s campaign pledges that focus on expanding welfare and improving the livelihoods of ordinary people.

Choi said he will first reshuffle the FSS to prioritize small loan finance.

“The role and responsibility of the financial consumer protection department will increase as well,” he said, adding that the FSS will consider increasing public participation in monitoring unfair financial practices.