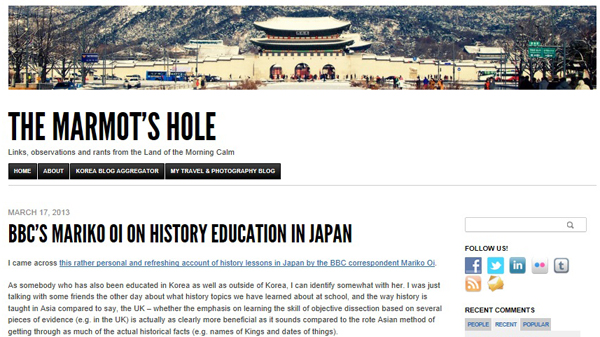 The Marmot’s Hole is Koehler’s blog on political issues and all things he finds amusing.

So goes the response of a few lucky expat souls.

To write about what you want, when you want, from the comfort of your own home, while also making money is a dream shared by many yet achieved by few.

The odds are stacked against blogging full time for a living, but there are some expats who have nearly made it there. The longest-surviving expat blog in Korea, The Marmot’s Hole, just reached the decade milestone this year. So to mark the occasion, the Korea JoongAng Daily talked to three opinion leaders in the field who created some of the go-to blogs people access when looking for information on Korea.

Blogging still isn’t their only source of income, but as these three individuals testify, there are other ways to make money and set yourself on a new career path if you’re able to drive up the hits.

The three Americans began life in Korea as English teachers and found more than a hobby in their blogs, proving that the sky’s the limit in the blogosphere.

You can’t talk of the expat blogosphere without mentioning its central figure, the one who started it all - the Marmot himself. 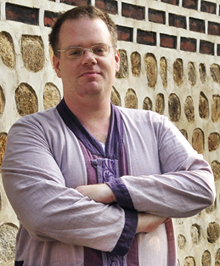 His name is Robert J. Koehler, and if you haven’t heard of him before, you’ll probably recognize the name of his blog, The Marmot’s Hole.

Dabbling in heavy topics like Korean politics and expat issues, the site was named without much thought after the furry creature.

Arguably one of, if not the most-read English-language blog about Korean society and politics, Koehler began blogging 10 years ago when he was teaching English at a provincial college.

“I first started documenting my life with photos,” says Koehler. He would also post a political comment now and then, and noticed a spike in views.

“Back in 2003, blogging was really coming into its own,” says Koehler, who thought it was a natural progression to blog about politics, since he majored in it. Now he gets about four to five thousand hits per day.

The man behind Korea’s longest-running expat blog says that all he sought out to do was to put fingers to keyboard to collect his thoughts and observations, especially about Korean politics and governance under the Roh Moo-hyun administration.

“You have all these thoughts all the time and you wonder if you should write it down,” says Koehler.

Despite being passionate about politics and fair reporting, Koehler does issue a warning to his readers.

“This blog is NOT representative of Korea. The Marmot’s Hole is in no way, shape or form a fair representation of Korea,” reads a disclaimer on the blog.

As well as being a notebook, Koehler says his blog “is a place where people who have an interest in Korea can come together and talk.” Topics run the gamut from North Korean missile launches to expats behaving badly.

His posts are timely, often controversial, and his followers come with as much bite - some of his readers are foreign correspondents based here, a fact that Koehler doesn’t take lightly.

“Have you seen my responses?” Koehler jokes, referring to the often heated discussions that take place, especially between expats in Seoul and Korean nationals living abroad.

Koehler says most of his followers are from Korea and the United States, and some are from Japan and the rest of the world. With such a diverse crowd reading his posts, Koehler says the all he hopes to do is to act as a mediator of sorts.

Not only that, “what goes on in a Korean article is very different from what goes on in the English language, so I try to fill that gap,” says Koehler, who starts off each day by browsing the Korean Web portal Naver, to see what’s getting netizens riled up.

While his love of commenting on political issues and his gift for communicating don’t quite pay the bills, they did lead to a successful career in publishing.

Local media took notice of him, and it wasn’t long before he started working for a publishing house based in Seoul.

As the editor of Seoul Selection, Koehler also has a book under his name and is one of the most talked about bloggers in the expat community.

“I guess I’m somewhat good at this,” says Koehler, who mentioned that despite his long-term success online, that it’s still a learning process for him.

“Looking back on what I posted earlier, I can’t believe some of the things I posted,” says Koehler. But he says that through blogging, he’s built up a wealth of accumulative knowledge.

Now in his seventh year at Seoul Selection, Koehler says that he is still surprised by his continuous following. But if there was a secret to his success, he believes it to be his love of the subject matter.

“I’ve been blogging for 10 years, I don’t know how long this medium is going to last,” he says.

But despite the changing times, he says he’s happy with the life afforded him by his popular Web site. After all these years, he’s happy to be blogging about “things I find amusing.”

A year after Koehler first blazed the trail, Zen Kimchi’s Joe McPherson also set out to conquer the Korean blogosphere with an appetizing specialty of his own - Korean cuisine.

McPherson also contributes to leading publications from time to time, his latest being an article for The Wall Street Journal. 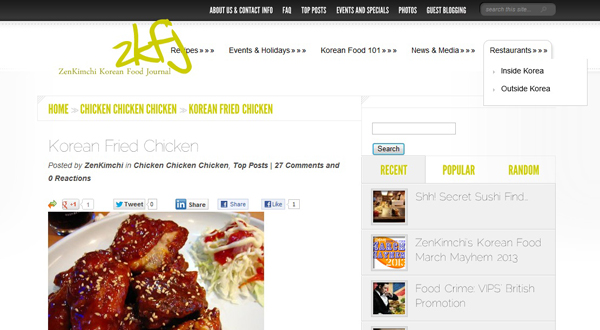 Zen Kimchi is McPherson’s blog on his experiences with Korean cuisine. 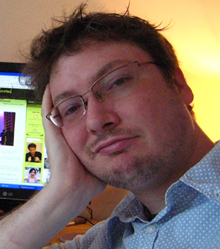 A big promoter of Korean food, McPherson now runs food tours around the Seoul and has a media liaison and restaurant consultation business on the side. But rewind nearly 10 years and McPherson says his beginnings were very humble.

“Part of the reason I came to Korea was because when it came to Korean food, there was a black hole,” says the Alabamian, looking back to 2004 when he relocated to Korea after studying Korean history at college stateside.

“I started e-mailing family and friends on the plane, to tell them I was okay, and then I was writing e-mails to everyone everyday,” said McPherson of how he got into blogging.

The process was easy enough, but he admits he wasn’t all that serious about it in his first year.

That all changed though when he started creating content that he saw missing here.

“I started blogging about food because there was nothing on it to read,” explains McPherson.

“Since I was a kid I loved food. When other kids asked for bicycles, I asked for a wok.”

So to blog about his encounters on the Korean dining scene, which McPherson refers to as “getting into a bathtub of ice water,” seemed like the logical step.

“I was the second food blogger on the scene,” says the food aficionado, who says his wife scolds him for “always talking about food.” The first expat food blogger left the scene just as McPherson got settled in.

And since taking over the vacancy, his love of eating seems to have paid off - Zen Kimchi draws three to five thousand visitors a day.

No longer writing solo, McPherson’s staff writers dispersed throughout the world post recipes, local Korean restaurant reviews and all things Koreana for readers who are quick to devour anything related to Korean food.

“I know most of my followers are in America, then second Philippines, followed by Singapore, Malaysia, then Korea,” says McPherson.

Fuelled by his following online, the mastermind behind Zen Kimchi diversified into other food-related businesses that help keep his blog afloat.

Being a respected figure in his field, McPherson officially began consulting and liaising for foreign media in 2007.

He’s helped out New York Times reporters on assignment in Korea on a number of occasions, while his company Zen Kimchi International is busy looking after the taste buds of tourists.

Looking forward to his 10-year mark, McPherson says the blog is just the beginning.

“We are looking into a smart phone application,” he says without giving too much away, “and in the future we want to go into tours, export-import business and more food tours.”

Of the three bloggers the Korea JoongAng Daily talked to, Mimsie Ladner started blogging the latest.

In 2009, the fresh-faced beauty from Mississippi made the big move to Korea, transitioning from nursing to teaching kindergartners.

“I started blogging to keep my overprotective parents and curious friends informed of what exactly I was doing in Korea,” says Ladner. 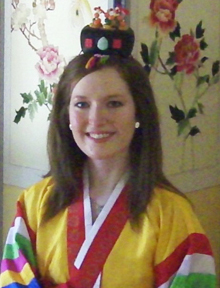 “At first I didn’t pay any attention to my blog’s statistics.” But regardless, the expat blogosphere was taking notice.

It wasn’t long before people were not only reading, but also subscribing to the posts made by the pretty American.

While Koehler has his political posts and McPherson his cuisine, Ladner’s stake to expat blogging fame would be her insightful observations on the land of the morning calm.

“I’ve been persistent in writing about places and topics that haven’t been acknowledged in the Korean blogosphere,” says Ladner, who likes to explore new places and sights that other expats may have overlooked. 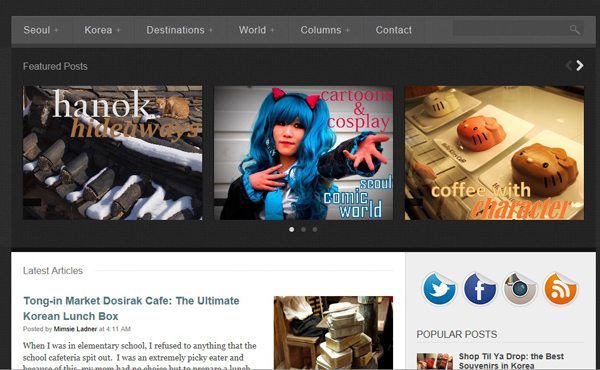 She adds that having an eager readership has motivated her to explore Korea and its culture, something she might not have been as keen to do without a pressing reason.

And just like the other two, Ladner admits that by maintaining her blog, she’s become a well-informed netizen herself.

“It has helped me learn about the people, the food, the history, and the culture of this amazing country.”

Ladner takes her time in writing her posts and spends a lot of time researching, and in turn finds it rewarding when she finds out that her readers are “able to learn something about Korea that they didn’t know before.”

Surprisingly for her, Ladner found that a large number of her followers are Korean nationals.

“I’ve received comments from my Korean readers telling me how fascinated they are to read about their own culture through the perspective of a foreigner.”

And it’s not just the public that’s taken notice of Ladner. Although she didn’t start off wanting to make money from her posts, Ladner admits that she’s had a few business sponsors over the past year which helped her get out and experience more of Korea.

“As many Korean businesses are looking to reach out to the international community, they are wanting English content,” Ladner says.

Even better than endorsement deals, she’s also had job offers from companies who found her online, not to mention stints on TV.

“This past year, I managed a social media page for the Seoul Metropolitan City Government,” says Ladner, adding that she has a few similar opportunities lined up for the coming months. And through the opportunities presented to her, the American says she is now eyeing other career paths, namely destination and tourism marketing, something she never imagined years ago when she was studying nursing.

Joining Koehler and McPherson at a later stage of the growing online expat network, Ladner says she has also met some great people through the medium. As well as publicizing each other’s blogs, Ladner says she often takes part in expat Tweetups (a group meet-up of Twitter friends), which encourages her.

And of course, there’s the merit of writing itself. “I feel that through my writing, I am able to inspire others.”