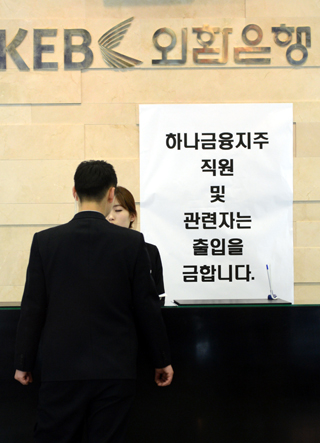 The Supreme Prosecutors’ Office yesterday raided the headquarters of Korea Exchange Bank (KEB) in Myeong-dong, central Seoul, after suspicions were raised that the bank had unfairly raised loan interest rates on small- and mid-size firms. Prosecutors secured related documents such as accounting and data processing files, and a list of corporate borrowers.

“It is the first time that a large commercial bank is being investigated by prosecutors in regard to manipulating an interest rate spread,” said an official from the prosecutors’ office.

A rate spread refers to added interest after weighing the risk a borrower holds. For example, the spread falls if a corporate borrower has high credit and low risk of going bankrupt. By law, a lender is not allowed to change the interest rate of a loan given to a borrower until the loan contract expires unless there are reasonable grounds, such as an increase in loans and a change in the borrower’s credit worthiness.

The raid comes after the Financial Supervisory Service reported to the prosecution early this month that from June 2006 to last September, KEB received a total of 18.1 billion won more in interest by inserting higher rate spreads into its computer network for loan agreements signed with 3,089 companies. Higher rates were entered into the computer despite a regulation that bans a lender from changing rates in the middle of a contract.

KEB is also suspected of receiving higher interest from company loans even when it was in fact required to lower the interest rate when the Bank of Korea lowered the country’s key benchmark rate.

According to the FSS, the bank received 1.27 percent higher interest on average.

“The documents [from KEB] were secured to find out whether [KEB] requested unfair collateral or to make a savings deposit when it gave loans,” the prosecution official said. “Also, we are looking into whether the bank used its superior position to infringe upon the rights and interests of a company.”

The FSS has already given a warning to KEB over the related suspicions and taken disciplinary action against nine former and current employees involved in the case, including Richard Wacker, former KEB Chairman.

“We will examine whether we will summon former chairman Wacker who is currently in the United States after we analyze the seized documents,” the official said.

The investigation is in line with President Park’s “economic democratization” pledge. Many of the companies affected by KEB’s suspected interest manipulation are mainly small- and mid-size firms.

“When small companies like us receive loans from banks, we always confront discrimination,” said an official from a small and mid-size firm. “Even if the banks raise loan interest rates on us, though the contract does not specify to do so, we have no choice but to accept the move to receive more loans in the future.”