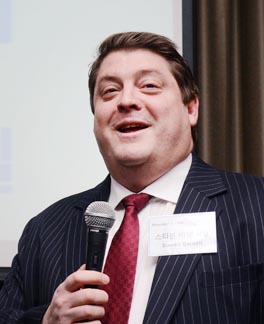 Chartis Insurance Korea, AIG’s general domestic insurance operation, yesterday announced it will change its name to AIG Korea to solidify its presence in the region.

The company said the rebranding is a part of AIG’s global strategy. AIG U.S. headquarters unveiled the new AIG brand in October when the company, which once suffered a liquidity crisis, eventually completed a turnaround by returning $182 billion to the U.S. government and earning a profit of more than $22 billion. During the bailout period, AIG switched the name of its property-casualty insurance arm to Chartis.

The rebranding will take effect in Korea next month when the Korean unit begins its fiscal year.

“A brand survey conducted in the last half of 2012 demonstrated that brand awareness for AIG in Korea is 95 percent and that is higher than any other country in the world,” AIG Korea CEO Steven Barnett said in a press conference at Conrad Seoul. “Next year we will celebrate our 60th anniversary in Korea and our commitment in this country has never been stronger. We will continue to build on our commitment to the Korean market by providing more value to customers through a variety of products and exemplary service.”

The Korean unit of AIG, which is known for specializing in insurance policies for seniors, said it will continue expanding into this specific market while developing new products targeting younger consumers. Currently, insurance policies targeting seniors make up 50 percent of AIG Korea’s sales.

Kimball Igleheart, senior vice president at AIG Korea, said the company is not looking into any merger or acquisition deals.

“We will concentrate on organic growth, building our book internally, investing in marketing costs and investing in IT infrastructure,” he said.

Igleheart added that the local market is significant for AIG given that Korea is the company’s sixth-largest insurance market. Korea is the third-largest market, after Japan and United Kingdom, in terms of AIG’s investments in direct marketing.