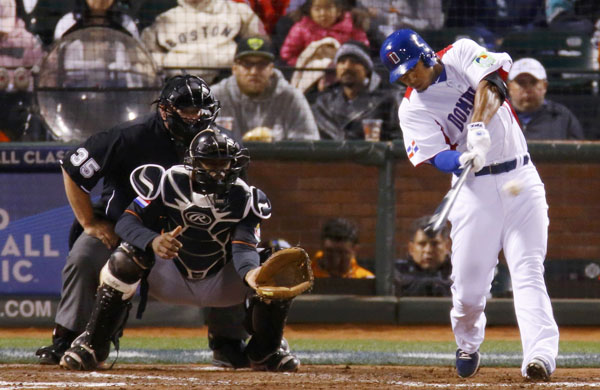 Dominican Moises Sierra hits an RBI double as his team knocked the Netherlands out of the WBC in San Francisco on Monday. [REUTERS/NEWSIS]

SAN FRANCISCO - Moises Sierra hit a tying RBI double in the fifth and Jose Reyes added a go-ahead single two batters later as the Dominican Republic reached the World Baseball Classic final with a 4-1 win over the Netherlands on Monday night.

Edwin Encarnacion had an RBI single as the undefeated Dominicans survived a rocky start from Edinson Volquez, who benefited from Sierra’s catch over the left-field wall in foul territory to end a first-inning threat.

The Dominican Republic will meet Puerto Rico in the final on Tuesday at AT&T Park, just three days after the Dominicans won their previous head-to-head meeting in Miami.

Tuesday’s winner will earn the distinction of world champion for the first time in the three-event history of the WBC. The Dominicans were still fuming four years after the Netherlands beat them twice in the 2009 WBC’s first round for a stunning early exit.

Players rushed out of the dugout as fans chanted “Dominicana! Dominicana!”

Former Oakland and San Francisco shortstop Miguel Tejada earned a start at third base and singled twice and scored a run. He drew cheers from the Bay Area fans during pregame introductions.

Andruw Jones hit a two-out single in the fourth for the first Dutch hit against Volquez, who yielded Wladimir Balentien’s first-inning RBI groundout before settling in to earn the win.

Carlos Santana hit a one-out double in the fifth and Sierra followed with an RBI double as the Dominicans tied the game at 1 and later chased Netherlands starter Diegomar Markwell.

The Dutch lefthander, who came in at a 2-0 with a 0.90 ERA in his two previous WBC outings, didn’t allow a runner past first base through four innings. But his pitch count quickly went up in a four-run fifth as the Dominicans tagged him for five hits, so that was it considering the WBC pitch limit is 95.

Tom Stuifbergen replaced Markwell with two outs in the fifth and threw a wild pitch on his first offering to Robinson Cano, allowing Reyes to score from third for an insurance run.

This game drew only 27,527, compared to 33,363 a night earlier as Japan went down to the surprising Puerto Ricans.

While hardly as festive without the favored Japanese, some sections of fans stayed on their feet and danced to music and the beat of drums and horns. AP