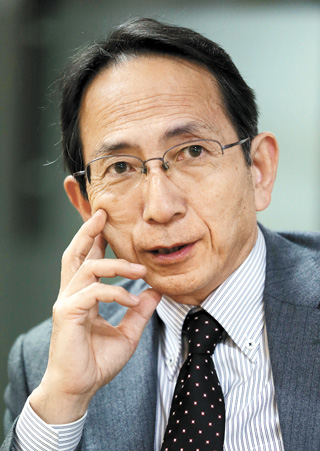 Yoshibumi Wakamiya, 65, former editor in chief of Japan’s Asahi Shimbun is known as a pro-Korean Japanese journalist. His column published in 2005 that said, “Acknowledge Korea’s sovereignty over Dokdo and name the islets ‘the islets of friendship,’?” stirred up great controversy.

Early this year, he retired from the newspaper and embarked on a new life in Korea as a chair-professor at Dongseo University in Busan; visiting scholar of the Research Institute for Japanese Studies at the Graduate School of International Studies at Seoul National University; and as a student at Sogang University’s Korean Language Education Center. His last stay in Korea was 32 years ago in 1981 when he came as an international student. The JoongAng Ilbo met Wakamiya last week in Gwanghwamun, central Seoul, for an interview.

Here are some excerpts:

Q. How is your new life in Korea?

A. The biggest task for me now is learning Korean at Sogang University’s Korean Language Education Center. On weekdays, I am at school from 9 a.m. to 1 p.m. to improve my Korean language ability. My first visit to Korea was in 1979 toward the end of the Park Chung Hee administration. In 1981, I came back and stayed in Seoul for a year to study.

Seoul has transformed into such a charming city that is nothing like Seoul 30 years ago. The image of Seoul in a regular Japanese citizen’s mind has also changed greatly over the past years.

You must have close relations with some of Korea’s key figures. Did you meet anyone so far since you came back to Seoul?

I met former President Kim Young-sam. He said that President Park Geun-hye is a “smart person so she’ll do well as president.” I think Kim was favorably impressed by President Park when she paid a courtesy visit prior to the presidential election.

In your view, how did relations between Korea and Japan change over the years?

I divide the before and after of Korea-Japan relations into four phases. First is during the Syngman Rhee era. Anti-Japanese sentiment was very strong in Korea while Japan had no inclination toward introspection regarding its past affairs. The second phase was after normalization of diplomatic relations. The two countries came to a consensus in terms of mutual benefit. Korea needed Japan’s help for its economic growth and Japan strategically cooperated with Korea to salvage its relationship. South Korea was the only country, other than North Korea and China, that had a poor relationship with Japan. The democratization period around the 1988 Seoul Olympics is the third phase. During that time, Japan’s perception of history began to change and some Japanese politicians began apologizing to South Korea one after another.

Now we have entered into the fourth phase. Issues that were sealed began to emerge. Japanese have begun to express their weariness over having to continue to apologize, while Koreans continue to point fingers at the Japanese saying they don’t know how to self-reflect. It’s in a vicious cycle. Compared to the past, the Korea-Japan relationship hasn’t taken a turn for the worse, but it has become hardened.

How do you see the Korea-Japan relationship under President Park Geun-hye and Prime Minister Shinzo Abe? In Korea, we are anxious about Abe’s conservative political views.

Ideologically, Abe has conservative political views, however, he is a clear-eyed politician. Before the Liberal Democratic Party’s presidential election, he said he wanted to revise the Kono and Murayama statements in an attempt to win right-wing votes. Just before the general election, he kept his voice down, and when he became the prime minister, he lowered it even more.

Abe’s support rating is continuing to go up. Abenomics [Abe’s economic policies] is, of course, one of the contributors to the increasing support for Abe, but it’s because he hasn’t made a right-leaning remark. I expect such support to continue to the upper house election in July. There are concerns that he’ll display his right-wing inclination if the Liberal Democratic Party holds a majority in the Upper House, however, I believe he wouldn’t. Of course, he may release the Abe Statement, but it’s not going to happen so soon.

What about the constitutional reform?

I believe the content is important. I, and also the Asahi Shimbun, am against it, but not all of those who are calling for a constitutional amendment are rightists. There are many practical rightists who believe “the war-renouncing Article 9 of the constitution conflicts with reality.” Those who support Abe’s proposal of establishing a state guard are the very far rightists. There wouldn’t be more than two thirds of yes votes to pass it. If Abe wants to amend the constitution, he’ll have to ease it a lot. Above all, the New Komeito Party, which is the LDP’s key ally, is absolutely against it.

President Park is scheduled to visit the United States in May. When will Korea-Japan summit talks be held?

The Korea-China-Japan trilateral talks will be held first. It is usually held in May, and this year Korea is the host country. Currently, with issues concerning the comfort women and Dokdo in their sensitive state, it is not easy for President Park or Prime Minister Abe to visit Japan or Korea. There’s a way that President Park can stop over in Japan after her visit to the United States. She shouldn’t think too much of the formalities of having official visits, but try to make use of such a method.

North Korea’s provocations continue. Will this be a chance for Korea and Japan to strengthen their relationship?

Basically, North Korea’s provocation is a threat to both South Korea and Japan. It’s essential for the two countries to cooperate and form a liaison. But it’s Japan’s viewpoint that South Korea is only looking to China and not Japan. China’s change of attitude is a welcome move, however, it’s not very certain how truthfully and to what extent China will pressure North Korea. Even during the Bush administration, the United States provocatively responded to North Korea, however, it has become somewhat conciliatory. And it seems that for the Obama administration, the North Korea issue has been brushed aside due to Iran.South Korea and Japan must appeal to China and United States about our situation.

Do you have anything to say to young Koreans?

I would ask them to look at the world extensively. Japan is not a dangerous country. It is inconceivable for Japan to suddenly converge into a military power or plan another invasion considering the current economic climate as well as the international order. In the past, Koreans often told Japan to act more like an adult because it was a powerful country. But now, I want to say it back to the Koreans.