The hotel’s Renewal Suite by architect Choi Si-young has been recognized for its Korean design by the Ministry of Culture, Sports and Tourism.

It’s one of three suites that were created in 2010 in the traditional style. Furnishings and decor items were designed by a top Korean interior designer.

The culture ministry officials who pick such buildings noted the use of wood, stones and paper in the Renewal Suite. 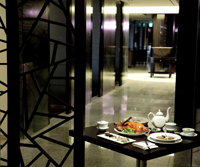 Through April 30: The hotel’s restaurants are having weekend specials.

The hotel’s weekend specials at Taoyuen (Chinese), Murasaki (Japanese) and Tuscany (Italian) include seasonal seafood or tenderloin steak. The menus are priced at 68,000 won ($60.92) per person including taxes and service charges.

In March and April, two diners can get a 20 percent discount, and in a group of three, one person eats for free.

Tuscany’s specials include an amuse buche, shrimp ratatouille and rack of lamb. 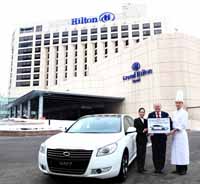 Through May 15: In celebration of its 25th anniversary, the hotel is holding a prize giveaway. Every guest who uses any of the hotel’s restaurants or rooms is eligible. Winners will be selected by lucky draw and prizes include a Renault Samsung SM7 European Prestige Sedan, flights to European destinations, overnight accommodation vouchers at Hilton hotels and Nespresso coffee machines. The winners will be announced on the Grand Hilton Seoul’s Web page after May 16.

From April 5: The hotel will begin celebrating its 50th anniversary on April 5. The festivities will begin with the “2013 Culinary Evolution,” which will feature food made exclusively with local ingredients. The young chefs from the hotel’s European, and Korean restaurants as well as its patisseries and more will participate, competing to create their own innovative recipes with domestic ingredients.

The competition will begin on April 5 at 9 a.m. at the hotel’s Art Hall.

Through April 14: Oakwood Premier Coex Center has spring specials in its Residents’ Lounge. Korean pancakes called jeon will be served with seasonal greens like watercress, shrimps and spring onions. A variety of stews will be served with ingredients such as fish, beef, dumplings and snails. Prices start from 15,000 won including taxes and service charges.

The hotel’s delicatessen, Cilantro Deli, and Japanese restaurant Genji is offering gourmet selections that you can take with you.

You can choose from an array of sandwiches including club, salmon, vegetable, four salad, along with breads and individual desserts at the Cilantro Deli. 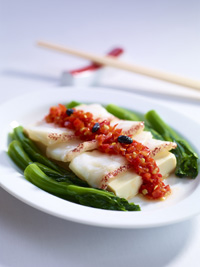 Today to March 31: The Chinese Restaurant at the hotel will be hosting guest Chef Lo Kwai Kai from the Hyatt Regency Hong Kong, Tsim Sha Tsui.

The chef, who has over 30 years of culinary experience, will prepare a range of Chinese dishes, including steamed cod fillet, Shanghai-style stir-fried shrimp with preserved salted eggs.

Ongoing: The JW Marriott Hotel Seoul presents a promotion called “Dad, Where Are We Going?” through which children can spend time with their fathers while mothers are able to soak in the spa.

* All information is culled from hotels.