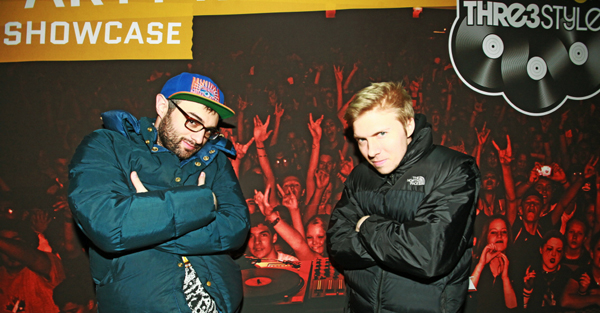 DJ Shiftee, left, and DJ Four Color Zack were invited to perform at Korea’s showcase of the Red Bull Thre3Style on March 14. Provided by the organizer

On the evening of White Day on March 14, instead of bestowing sparkling bracelets to their girlfriends, some guys decided opted for a wristband instead and lining up to enter Club Answer in Cheongdam-dong, southern Seoul, for the Red Bull Thre3style Korea’s showcase.

Red Bull Thre3Style is the world’s biggest DJ battle in which they go head-to-head with 15-minute sets that incorporate a minimum of three music genres. Competitions are held across the globe, and the finalists of each country compete at the World Finals in September. Prior to holding three preliminaries and the Korea Final on May 2, the Korean organizers decided to organize a showcase last week.

Before the DJs got behind the turntables, the Korea JoongAng Daily took time to talk to two American participants.

Although this was the first visit to Korea for DJ Four Color Zack, last year’s winner of the World Finals, he says he’s heard great things about electronic music fans here.

“I heard Korean DJ crowds are extremely supportive and involved. Having the crowd like that is really great because a lot of other places don’t. In other places, it seems it’s more work for DJs to get the crowds involved and understand what the concept of the music is. But from what I hear, Korea has just a natural tendency to just understand and support the DJs,” Four Color Zack said.

He took his name from the four-color pen he always used while working in the design industry. After studying graphic design in college, Four Color Zack ran a design studio for five years in Seattle. He also worked as a senior director at an advertising agency until three weeks ago, when he decided to let it go to focus on being a DJ.

“I’ve always tried to keep DJing as just a hobby even though there was demand for it,” said Four Color Jack. “But at this point, there’s no reason to try to keep it hidden and I’m just taking advantage of the opportunity.”

After winning the World Finals last September, life has been a whirlwind for Four Color Zack. He was invited as a judge for qualifying rounds at this year’s Red Bull Thre3Style competitions in the United States and will also perform across the globe. At a recent performance for radio station Power 106 Los Angeles, he mixed in a few seconds of K-pop and the fans went wild.

“I put a really short piece of 2NE1’s ‘I’m the Best’ and so many people responded by hitting me up on Twitter saying how they loved my mix with K-pop. It was cool to experience that and to see how people are receptive to K-pop,” Four Color Zack explained.

DJ Shiftee, a Harvard graduate and math geek, was also invited to perform for the showcase. He’s an active DJ as well as a teacher at Dubspot DJ & Production School and New York University.

“I’ve been DJing since I was 13 years old. For me, I’ve always done things that I thought were fun and I thought were challenging. And that was math and DJing,” said Shiftee.

Although Shiftee’s math background seems to have little to do with mixing music, he says it has helped him a lot.

“When trying to solve a math problem, you focus on one thing for a long time and feel pain in what you are doing but you still press on. That’s the same kind of approach to making a DJ routine. Working on a math problem has helped me to build a tolerance for pain,” said Shiftee. “When people think of DJs, they think of big parties, but for me, it’s like nonstop work and I push myself to get better in different aspects. I’m always trying to find new music, new techniques find new ways to approach music, and that’s really the main driving force behind what I do.”