Dominant Dominicans get their WBC win at last

Dominant Dominicans get their WBC win at last 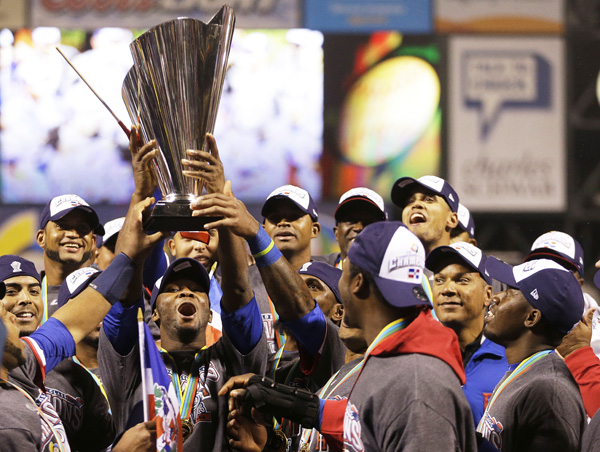 SAN FRANCISCO - Tony Pena passed around the shiny trophy and let all of his players offer their besitos, or little kisses. Robinson Cano passed around a phone as his teammates took turns receiving congratulations from Dominican Republic President Danilo Medina.

“We appreciate that from the president,” Jose Reyes said. “This win is all about the Dominican Republic. They were hungry waiting for this moment, and we did it.”

The Dominican Republic has its World Baseball Classic crown, at last.

Cheers of “Dominicana! Dominicana!” rang out through the rain at AT&T Park all the way to the lively streets of Santo Domingo.

Edwin Encarnacion hit a two-run double in the first inning that held up, and the Dominicans capped a dominant, unbeaten run through the WBC with a 3-0 win against Puerto Rico for the championship Tuesday night.

“Tomorrow will be a national holiday,” said Moises Alou, the proud Dominican general manager. “It was a tremendous win.”

Cano earned MVP honors, Erick Aybar added an RBI double to back winner Samuel Deduno, and the demonstrative Dominican righty threw his arms into the air in delight after watching a run-saving defensive gem by center fielder Alejandro De Aza in a tough fifth.

It was fitting, too, perhaps, considering the World Series champion Giants clinched the NL pennant against the Cardinals in a downpour on this very field last fall.

Some 50,000 more supporters gathered to watch on televisions inside and outside of Estadio Quisqueya in the Dominican capital city.

“We want to enjoy every single moment, because we don’t know if this group will be together again. I doubt it,” Dominican manager Tony Pena said.

Now, the Dominicans get their long-awaited fiesta. A party they figured to have in 2009, when the Netherlands spoiled the plan by beating them twice for a stunning first-round exit.

After Fernando Rodney struck out Luis Figueroa to end it, the Dominicans rushed the mound - each player waving his own flag. Well, Rodney held up his lucky plantain that served him well for the second straight day. He won’t eat this platano, which he said “is going to be my second trophy.”

“This is my gold medal,” he said. “It will be my black diamond, because it’s changing color. I kept telling everybody to relax and not to worry about [the pressure].”

The Dominicans (8-0) won it in the city where countrymen Felipe, Jesus and the late Matty Alou made history in 1963 when they appeared in the same Giants outfield for several games. Moises Alou is the son of former San Francisco skipper, Felipe.

No matter their team, Caribbeans had so much to cheer in the championship of a tournament missing the star-studded American team yet again. The U.S. failed to reach the final for the third time in as many WBCs.

This game gave new meaning to the idea of a Caribbean championship.Deduno followed up a fine outing in a win against the Americans last Thursday with another strong performance that will send him back to the Minnesota Twins with some nice momentum.

Deduno struck out five in five scoreless innings, allowing two hits and walking three to finish with a 0.69 ERA for the tournament. And Rodney struck out two and finished for his seventh save as the bullpen closed out this special run with 25 2-3 scoreless innings. AP