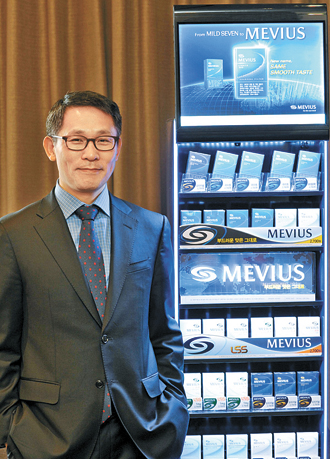 JT International Korea announced yesterday it will change the name of its Mild Seven cigarette to Mevius. Mild Seven, the world’s top selling charcoal-filtered cigarette, has been well received throughout Asia.

“Since Mild Seven is mainly sold in Asia, we changed the name in order to capture markets such as Europe and the United States,” said Park Pyung-kee, general manager at JTI Korea, at a press conference yesterday.

However, it is questionable whether the name change will boost sales in the domestic market amid the recent government movement to increase prices and Japanese product boycotts.

“We understand that there has to be tax increase to reduce smoking in Korea. However, what we wish for is a transparent, predictable and moderate increase that will not disrupt the market,” said Sadi Bruegger, regional communications director at JTI Korea.

JTI earlier suggested introducing price indexing to revamp the tobacco consumption tax in light of recent debate in the National Assembly on how to restructure the cigarette excise tax.

JTI Korea is concerned about a sharp decline in sales if the price of a pack goes to 4,500 won.

In regard to boycotts on Japanese products, JTI Korea communications manager Christie Kang said sales have hardly been affected.

“Korean consumers are mature enough to consider quality and service over political issues when it comes to spending,” Kang said.