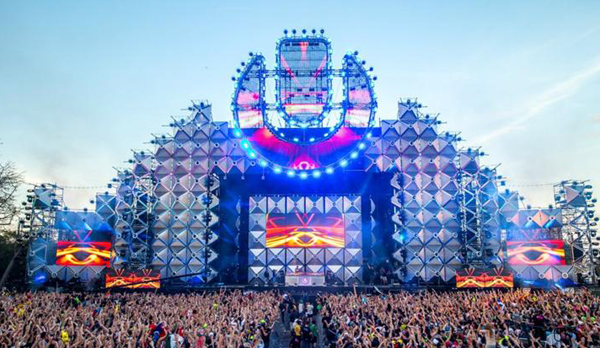 A crowd gathers at Ultra Music Festival 2013 in Miami, which runs through next week.

The next round of ticket sales for Ultra Korea 2013 opened on March 14 at 2 p.m. and the show has remained among the most popular events on box office Web sites.

The electronic music festival, to be held June 14-15, is growing in popularity as the modern genre becomes more common at home and abroad. Early-bird tickets already sold out in January and February.

Since last week, Ultra Korea 2013 has remained at No. 1 among concert and performance tickets sold on Yes24, demonstrating a sharp rise. At Auction, it was ranked second overall and first among concert tickets, and on Interpark, it is ranked third on the first day of sales.

Electronic music includes tunes produced using computers and synthesizers, and grew out of the European club scene in the 1990s. Later, Madonna and other U.S. pop stars became interested in the genre, increasing its popularity in America.

Recently, artists around the world have combined elements of electronic music with hip-hop, reggae and R&B.

In Korea, the most popular electronic songs are perhaps Psy’s “Gangnam Style,” Big Bang’s “Fantastic Baby” and Girls’ Generation’s “I Got a Boy.”

Releases of electronic music albums increased from 1,010 to 1,189 - or 18 percent - in January and February compared to the same period last year, according to Olleh Music. Its popular “Today’s Pick” service, which provides music recommendations to users each day, has also featured more electronic music.

In particular, the site’s “Club Mania Series” and “2012 UMF Set List” have recorded 13,000 views a day after recommendations from Olleh staff. This figure is far higher than those for even mainstream genres like pop, rock, hip-hop, R&B and jazz. Electronic music is showing a steady rise in popularity and maintaining high daily views.

Inquiries are reportedly flooding in from Korea and other countries, and the event is on its way to being the largest electronic music festival in Korea.

Fans are already visiting Ultra Music Festival’s Web site in droves to see comments and images from the Miami version of the event that lasts for two weeks from March 15. Information is uploaded in real time on Facebook (www.facebook.com/ultrafanpage).