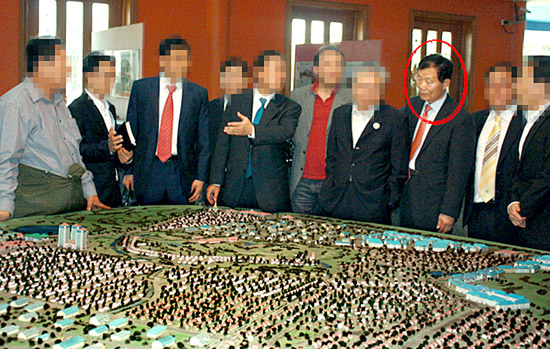 The embattled nominee to the defense minister, Kim Byung-kwan, visited an overseas resources developer in Myanmar, which was suspected of receiving special treatment during the previous administration, an opposition lawmaker said yesterday.

Park Ki-choon, floor leader of the Democratic United Party, revealed a photo of a group of officials visiting the Korea Myanmar Development Company, also known as KMDC, which won major offshore exploration contracts in Myanmar allegedly thanks to the preferential backing from the then-Lee Myung-bak administration.

The photo showed Kim listening to an explanation by an official as part of a media tour to the company in January 2011. 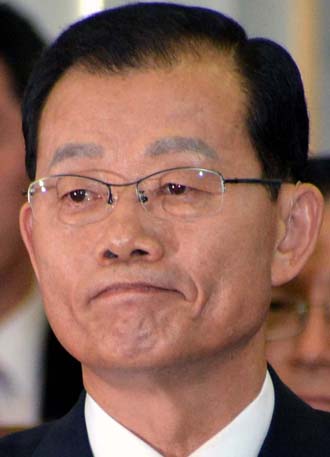 Previously, Kim said at a confirmation hearing that he doesn’t own any stake in KMDC and didn’t make any contact with the company at all.

The trip was four months before Kim purchased the stocks in KMDC in May 2011.

“It was a lie that Kim said he didn’t have any information about the company [before the stock purchasing] and he just bought it because of a proposal from one of his friends,” Park said.

Park also said Kim didn’t include anything about his trip to the company when he submitted records about his business trips to the National Assembly before the confirmation hearing.

“He must have worried that his link to the company would become a problem at the hearing,” Park said.

“It is a violation of the law regarding truthful testimony of a nominee at the National Assembly.”

According to the documents submitted by Kim before the hearing, he submitted copies of the arrival record cards to prove his business trips abroad.

Based on the cards, he traveled abroad 12 times since June 2007, but on the arrival card regarding the Myanmar trip in 2011, he wrote the purpose of the trip was “Other.”

Kim admitted that it was true that he visited the KMDC, but it was not related to his stock purchase.

“I just participated in the visit because the Grand National Party [then-ruling party] asked for my help, as a retired military general, in discussing economic cooperation with Myanmar, because the country is under strong influence from its military,” Kim explained in a statement released yesterday.

Previously, Kim admitted that it was true that he had purchased 750 unlisted shares of the firm for 30 million won ($26,986) in May 2011 and made an additional investment of 4.5 million won later that year.

But he said he “had forgotten about it because the stock price plummeted and it had almost no value.”

The ruling Saenuri Party has started to pressure Kim to give up his nomination and step down.

Shim Jae-chul, a supreme councilor for Saenuri, said at a meeting with senior members of the party that Kim “should step down and not tarnish the reputation of the president anymore.”

Because of the criticism of Kim’s ethics, the Blue House is mulling over the nominee’s fate.

“As there is no crucial flaw in Kim’s career, we are still moving forward with the nomination,” a Blue House official said.

“However, we can’t ruin the relationship with the DUP that has been restored by the agreement over the government reorganization bill.”