Xi offers his support for Park’s policy on the North

Xi offers his support for Park’s policy on the North 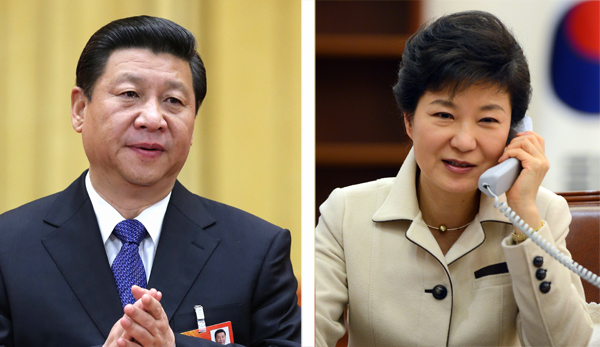 President Park and Chinese President Xi Jinping had a telephone conversation yesterday to discuss bilateral issues including the worsened security crisis on the Korean Peninsula, according to Kim Haing, Blue House spokeswoman. During their 20-minute talk, Park congratulated Xi on his inauguration as China’s president and talked about plans to improve ties between the two countries and the North Korea issues, Kim said.

According to Kim, Park explained her North Korea policy to the Chinese leader, asking Beijing to closely cooperate in realizing their mutual goals, including a nuclear-free Korean Peninsula.

“The South will sternly counter the North’s additional provocations,” Park was quoted as saying. “But if the North makes the right choice, we will improve inter-Korean relations through the Korea Peninsula process.”

Park asked China to work with the South to bring the North to a dialogue, Kim said. “Xi replied that he understands Park’s thoughts well and he will continue trying to persuade the North, although it is difficult.”

According to Kim, Park invited Xi to visit South Korea, and Xi expressed appreciation for her invitation. He also asked Park to visit China in the near future and Park accepted the invitation, Kim said, adding that the two countries’ diplomatic channels will consult to arrange the trip.

“Park told Xi that since the two countries’ administrations are newly launched around the same time, they should improve strategic communication based on the two leaders’ trust and expand civilian exchanges,” Kim said.

Xi praised the continuous development of the two countries’ relationship since Seoul developed diplomatic ties with Beijing in 1992, Kim said. “Xi said China hopes to explore its future together with South Korea.”

China, a longtime ally of North Korea, has been considered an important power to influence Pyongyang’s nuclear brinkmanship. Although it has been reluctant to punish Pyongyang harshly about its nuclear aspirations, China voted in favor of the latest UN Security Council resolution to impose fresh sanctions on the North in return for its recent nuclear test.

“The new Chinese leadership has a close and deep relationship with us,” a senior Blue House official said. “Because China’s role is very important in the current security situation, we are also trying to redefine our ties with Beijing.”

During yesterday’s conversation, Park told Xi that they had a valuable talk during his visit in 2005, reminding the Chinese leader of their years-old special relationship. Xi also called Park a “longtime friend of mine and the Chinese people,” during their talks.

Park’s relationship with Xi goes back to 2005 when they met in Seoul during the Chinese leader’s visit. At the time, Xi was the secretary of the Communist Party of China’s Zhejiang Provincial Committee and he proposed to meet with Park, then chairwoman of the Grand National Party.

Park changed her schedule and accommodated a luncheon with Xi and the two discussed a wide range of issues including North Korea. According to sources, Xi also expressed a great interest in the Saemaeul Movement, a political initiative launched in 1970 by Park Chung Hee, late president and Park’s father, to modernize the rural economy.