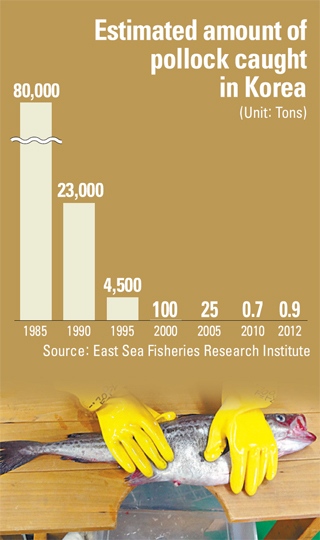 To account for the shrinking catch of walleye pollock, a member of the cod family, a team of local government and marine-related research institutes seeks to drive up the population of the fish species via artificial insemination.

The move reflects the local government’s effort to overturn the drastic drop in the amount of pollock caught near the East Sea.

The first step in the artificial insemination process is to extract eggs from a reproductive parent fish and sperm from a male fish.

The next step is putting together the secured eggs and sperm.

As simple as that sounds, the research team, led by marine studies professor Park Gi-young of Gangneung-Wonju National University and commissioned by Goseong County in Gangwon, faced challenges from the onset.

The team first dispatched a fishing boat three times since the end of February but failed to catch any pollock.

Then the research group operated two fishing vessels with nets off the East Sea several times, but only managed to capture one male pollock.

In a separate case, fishermen played their own parts by being on-board with their own hand-held fishnets.

These fishermen caught an average of two to three pollock per day and some of them were in a decent condition.

Typically, there is a fair amount of sperm, but the eggs were mostly premature, dampening the hope to enhance fishery supplies and resources.

“The most challenging part is to find a mature female pollock that can go through the artificial breeding process,” said Park Jeong-ho, a researcher at the East Sea Fisheries Research Institute, a state-affiliated organization participating in the project.

The research team began storing one milliliter of sperm to match with eggs anytime. They also check the vitality of the sperm regularly.

The marine researchers said that the eggs and sperm still remain premature but expect them to be fully mature by the end of April.

In an effort to increase the chances of cultivating more breeds, they are also poised to buy fertilized eggs from Japan and Russia.