Trying to turn the tide for Korea’s tennis team

Trying to turn the tide for Korea’s tennis team 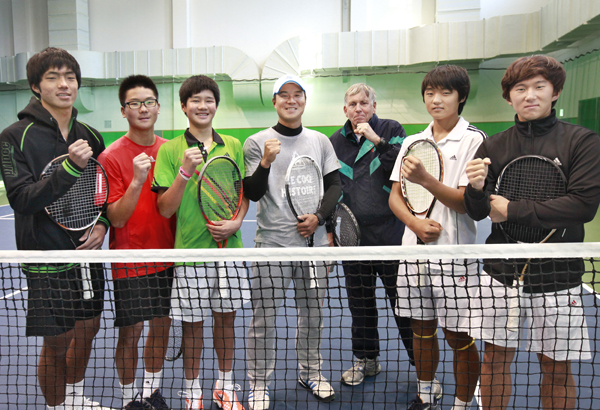 JINCHEON, North Chungcheong - Beating Lee Hyung-taik on the tennis court is still an unthinkable feat for many in Korea even though the one-time top Asian ranker in the world is four years into retirement. But not for 16-year-old Kim Duk-young.

On a recent afternoon on an indoor tennis court at the National Training Center in Jincheon, about a 90-minute drive south of Seoul, Kim kept the 37-year-old tennis giant breathless across the net, sending Lee into every corner of the court to chase down his shots. Kim broke Lee 21-17 in a practice set.

Kwon Soon-woo, 15, was up next. He, too, easily followed the unlikely pattern.

“It seems like these guys have gotten much better,” Lee said. “It’s good.” 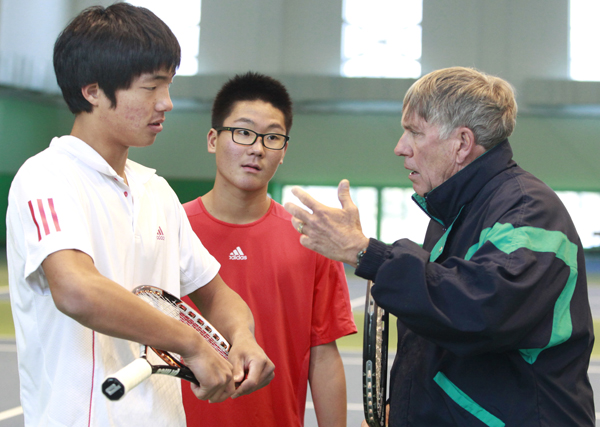 Korean tennis has never reached the global dominance of the country’s archery, short track skating and golf, and the outlook hasn’t been great. The best players in the country for now, both male and female, are hovering slightly below 300th in the world.
To vitalize the sport, the Korea Tennis Association launched a special development program for junior players last year, putting Lee at its helm. Doug MacCurdy, who was in charge of the player development program for the U.S. Tennis Association through 2001, was also hired on as another main coach. It’s only 10 months in, but things are already looking up.

Six Korean players, including four from the six-member team, got into the Australian Open Junior Championships in January. One advanced to the singles’ round of 16. Two others made it to the semifinal in the double’s event. It was one of the best-ever collective results that Korea has produced at a major junior tennis event.

Kang Ku-keon, 16, another team member, finished runner-up in the junior men’s singles at the Sarawak Chief Minister’s Cup ITF Malaysian International in Kuching, Malaysia on Sunday. Before that, Korean juniors had only rarely advanced to the final of a first-tier event. At the final, Kang, 83rd in the world junior rankings, lost 2-1 to Borna Coric of Croatia, 16, whose world ranking has risen from No. 6 to No. 4.

The successful formula isn’t visible during practice, at least not on the surface. The players, between chats with each other, casually warmed up with few patterns, a scene untypical of the usually orderly group training sessions of Korean athletes.

MacCurdy, dressed in a training jumper, looked on with few words. Then he shouted to player Kim Young-seok, “I’d like you to do five minutes without any instruction,” and went silent again.

The coaches said the players practice 30 hours a week, a modicum for some other Korean athletes in national training systems.

MacCurdy feels it’s important that they don’t practice too much. And when they do, they should do it as they like, he said.

“This is very important that they come from their head, not always from his [Lee’s] mouth and my mouth,” MacCurdy said. “Because when they play matches by themselves, there is no coaching.”

In one exercise, he marked off an area on one side of the court, leaving only a little space around the edges. Then he had the players aim for that space.

To start, the players would only get one ball out of five inside the court, but as the exercise continued, their success rate increased.

“He has taught us very specifically, and I think we’ve improved a lot technically,” Oh said. He said his goal before joining the team was to get into the junior top 100. Now, he’s setting his sights on the top 10.

The players were recruited in May of 2012. Lee said that they weren’t recruited based on their international rankings, but on basic physical ability, which he said is a more defining factor for success as a professional.

“They can get the results as long as they play more games,” Lee said. “What we’re looking at is not the current result but how good their athletic ability is, because that will determine success in 10 years.”

Thus, the KTA put physical development into the development program, keeping personal physical trainer, Kim Tae-hwan, by the players’ sides three days a week. The physical buildup was difficult at first, the team said, but Kim kept them at it, even during overseas competitions.

Kim said that the senior national tennis team recently visited the training center in Jincheon and joined the juniors, but they lagged behind the juniors physically.

“They aren’t aware of it, but their physical ability has improved significantly,” Kim said.

MacCurdy agreed. Visiting Korea as a coach since 1978, he said he has always marveled at Koreans’ physical talents, which have allowed the country to claim the top spots in many sports. He said that with a good program, that potential could fully blossom in tennis as well.

“I always felt that the pure athletic talent was outstanding, so why aren’t they playing a little bit better?” he asked.

Some junior players with potential also emerged, such as Lee Jong-min, who finished runner-up in the 1995 Australian Open junior singles, and Kim Sun-yong, who achieved the same record at the same event a decade later. But both Lee and Kim, along with others like Jun Woong-sun, a promising junior in the 2000s, failed to take their potential to the next level and disappeared into oblivion.

Some people, like Park Sung-hee, who was the best female tennis player in the country 20 years ago, said Korean tennis is in a vicious cycle.

Now a professor of the sports education at Kookmin University, Park said that lack of tennis stars is diminishing the popularity of the Korean tennis and that in turn is dissuading talented young athletes from picking up tennis rackets.

“There are 20 million Chinese kids who are scrambling to learn tennis to become a second Li Na. There’s no way that good players aren’t going to come out of China,” Park said.

Park said that she is encouraged by the improving performances of the junior development team.

“I hope someday that one of the players will be doing really well,” she said. “That could bring the popularity that the sport has been missing for so long.”