At Florence fest, Korean films are seen through Italian eyes

At Florence fest, Korean films are seen through Italian eyes 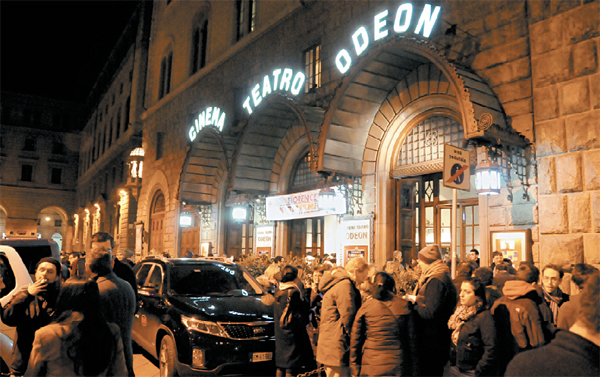 Italian film enthusiasts gather outside Cinema Odeon on the opening night of the 11th Floerence Korea Film Fest on March 15. By Anderew J.Clark

FLORENCE, Italy - The Florence Korea Film Fest opened on March 15 to a packed house of eager Italians. To mark the triumph of Korean films abroad, some of the biggest names of Hallyuwood descended upon the Tuscan capital city.

In between screenings, directors Choo Chang-min, Im Sang-soo and actress Jeon Do-yeon spoke about just how they managed to appeal to international audiences.

Seated under the Art Nouveau glass dome of the Cinema Odeon in Florence, in what was originally a 15th-century palazzo, the Italian audience was swept back in time to the 16th century on the other side of the world - the Joseon Dynasty as depicted in the film “Masquerade” (2012), directed by Choo Chang-min.

Here at the birthplace of the Renaissance, it was opening night of the 11th Florence Korea Film Festival, a celebration not just of Korean filmmaking but of Korea itself.

As the opening piece, “The Masquerade” kicked off the festival.

The tale of a low-born comic entertainer who became a reluctant stand-in for King Gwanghae (1574-1641), starring Lee Byung-hun in both roles, was a runaway hit in Korea, and the thunderous applause following the screening left no doubt of its reception at the festival.

Subtitled in both Italian and English, as were most films screened at the festival, the fusion of humor and drama against a historical background seemed to appeal to the audience, leading Choo, who attended the screening, to remark that he felt he had “touched the hearts of the Italian people.”

More than 50 short and feature-length films of all genres, including animation and horror, made up the 10-day festival, which this year showcased retrospectives of films starring Jeon, one Korea’s renowned actresses, and Im, a leader in the Korean filmmaking industry.

Two of Im’s works, “The Housemaid” (2010), starring Jeon in the title role, and “The Taste of Money” (2012), both of which were screened during the early part of the festival, tell the story of a super-wealthy Korean family. It is thought to be a dig at the leading chaebol families.

The sordid lives of the rich are a favorite subject in Korean film and television, as elsewhere in the world. Thus the organizers couldn’t have picked a better subject for the Italian audience; many aspects of these films might seem familiar, drawing the audience back to a bygone era where family was esteemed above all.

But in Italy today there is nothing to equal the centuries-old Confucian tradition in Korea of deference or obedience to one’s parents, older siblings or anyone of higher status. 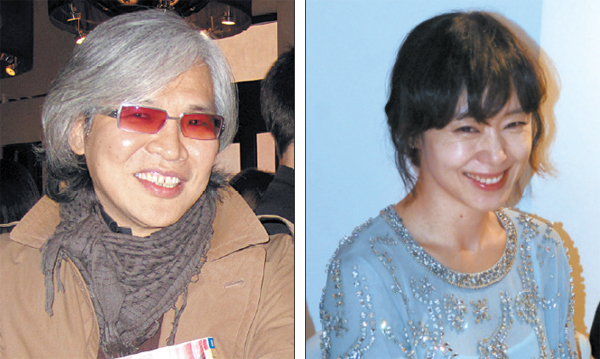 These values unfortunately were somewhat lost on the contemporary Italian audience, and so, too, were the subtle Korean family values.

To speak to Western audiences, “Koreans need to learn more about Western culture,” according to Im, “more about how to claim your own right, a personal right to your own opinion. That’s what’s important, and not to learn just the peripherals or superficial things.”

And in both films, Im takes care to include wine, fast cars, high fashion and other representations of high society that may appeal to international audiences.

Both films are strong commentaries on the inequality of Korean society, “and perhaps some aspects of my movies are familiar to Italians who went through the same situation and remember that time in Italy,” Im said, referring to the so-called “Years of Lead” from the 1960s to the 1980s.

Jeon, meanwhile, had a hunch that “The Housemaid” would please the Europeans, as it is about “the universal clash of classes.”

“It seems to be talking about Korean culture,” she continued, “but it’s not; rather it’s talking about people, the ‘haves’ and the super-rich who have been hurt and try to be healed by money but are not really successful in their endeavor.”

While at the festival, Jeon also spoke about her other representative works.

The film that brought her fame, the fantasy “My Mother the Mermaid” (2004), illuminates a very troubled mother-daughter relationship through the medium of a sci-fi genre.

Jeon stars as the time-traveling daughter who gets to know her mother when she was young, also played by Jeon.

Although set in a very different cultural ambience and in landscapes unfamiliar to Italians, the film connects with them because it does “not necessarily show only Korean values and not just Korean sentiment but those that could be universal,” Jeon said.