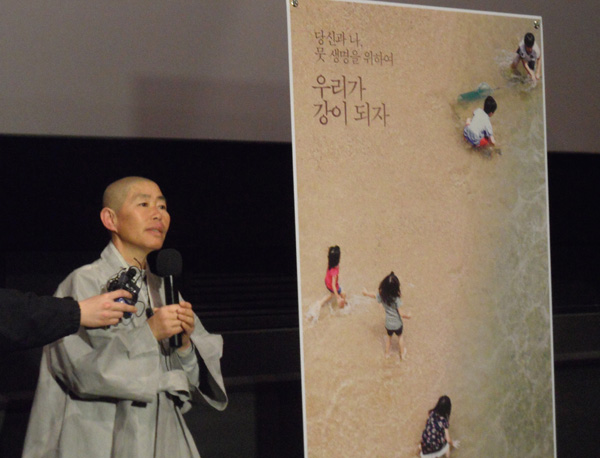 Venerable Jiyul, a Buddhist nun, speaks about her documentary at a press screening on Monday. Provided Cinema Dal

“Following Sand River,” directed by a Buddhist nun and shot on a shaky camcorder, has viewers asking, “What have I done for Mother Nature?” just as Venerable Jiyul intended.

This project born out of love, compassion and mostly sorrow is a peaceful retaliation of sorts against the government’s four-rivers restoration project, which began 2009.

But don’t get her wrong, it was never “supposed to be an answer,” said Jiyul. “At first, making a movie wasn’t the plan,” the respected nun explained at a press event held for the indie documentary on Monday.

“But when I saw the project announced on TV, what I saw wasn’t a proposal for restoration, what I saw was damage to my homeland,” said Jiyul on what prompted her to take action four years ago.

Although it took a few years for her to decide on a documentary, Jiyul knew that she had to get the story out to the public.

“I just wanted to chronicle the transformation,” said the 57-year-old who is perhaps best remembered for her 100-day fast against President Roh Moo-hyun’s bullet-train project that would have seen a tunnel built through Mount Cheongseong.

“Through the film, all I wanted to do was highlight the problem, and through it, hopefully come to a solution,” said the environmentalist.

Even without special effects, the captivating story draws in viewers.

Alternating between construction sites at the Yeongju Dam - part of the government project - and the residents forced to vacate, Jiyul fuses poetry, personal thoughts and a medley of stories from the displaced people.

The juxtaposition of pristine nature versus destructive machinery gives viewers a sense of urgency about what needs to be done.

The film will open March 28 at cinemas specializing in independent films.