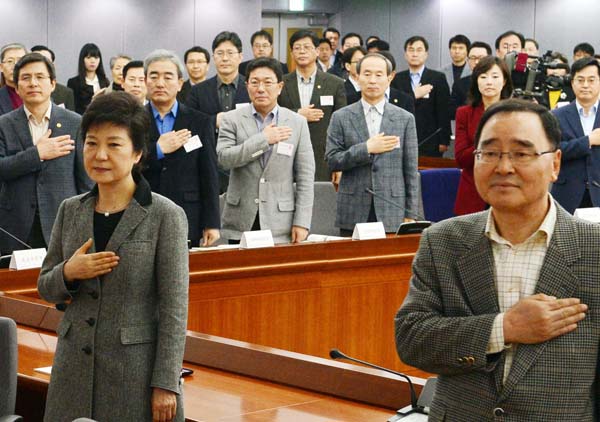 Bureaucrats have long sustained a fortress in the Korean government. One aide of former President Lee Myung-bak was asked when the president looked most worn out. “It is when a minister approaches with a decision for the president to make. It was often within the minister’s authority,” he said.

Such bureaucratic incompetence and complacency is deeply rooted. The episodes Kookmin University prof. Kim Byong-joon, former senior policy director to President Roh Moo-hyun, shared in over 13 pages in his book “No President For 99%” are mind-boggling. In one incident, conflict among different government agencies over jurisdiction and authority in a state project ordered by the president had been so extreme that the deputy premier on economic affairs had given up on intervening in the fight.

The presidential office had to finally step in. An assistant minister complained that his office staff spent six months spying on a rival agency’s activities and coming up with competitive strategies. Officials were entirely preoccupied with what was going on in the other office and whether it organized an “association” and whom the officials there met or phoned in the presidential office. His wife one night, listening to his conversation, yelled at him and asked if he was ashamed to be paid with taxpayer money for such petty work.

I asked him whether if it is any different in the government today. “The bureaucratic world President Park Geun-hye experienced during her father Park Chung Hee had been under full control by the president. It no longer works that way today.” The bureaucratic networking with outside parties and the industrial community has become too powerful for a president to handle.

The people mostly recruited in senior posts by President Park are generally docile, the former official said, which could suggest that the new government is taking pains not to make mistakes in the early stage. “Bureaucrats learn by nature to duck from responsibility. There are some radical ones. But they cannot last long.”

He continued, “In civil service, accountability is the most important. Civil servants sometimes need to serve as shields. They sometimes have to step down. But instead of taking responsibility, bureaucrats turn to the Blue House. They hope senior secretaries will tell them what to do. If not, they avoid making important decisions.”

I just sincerely hope bureaucrats repay the president’s trust with hard work. I wish they will prove themselves distant from the old ways and practices and even seek to reform themselves.

But it may be only wishful thinking. When President Park walked into a meeting in the presidential office recently, all the senior secretaries stood up and bowed deeply to their waist. They had been waiting sitting up straight before she entered the room. One secretary stood up and joked about the awkward and staid tension in the room. But everyone kept still without saying anything.

Another compared the scene as the first day of work for newcomers. If such a mood continues, we may have to expect all the report papers to go straight to the office of the president and pile up on her desk.

There does not seem to be anyone among the secretaries who would be willing and daring to take affairs into their own hands. We just hope the president’s patience and health can keep up with all the workload and responsibilities.