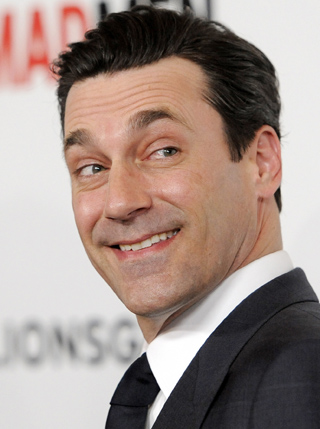 “I’m a big fan of Justin Timberlake,’’ Hamm said in a recent interview. “I think he’s a trendsetter, as they say. But he’s always been kind of a natty dresser.’’

The 42-year-old actor, who says he has an “appreciation for fashion,’’ returns as womanizing adman Don Draper when season 6 premieres April 7 on AMC.

“It’s nice that our show has had that sort of serendipitous resonance with fashion,’’ he said. “I think it’s great. I think it’s really cool.’’

As for Timberlake, Hamm believes the pop star is “a very fashion-forward kind of guy,’’ although the Grammy winner is guilty of at least one “fashion don’t.’’

“That one unfortunate picture of him in that denim tuxedo excused,’’ Hamm said with a smile, referring to Timberlake’s all-denim ensemble at the 2001 American Music Awards. AP