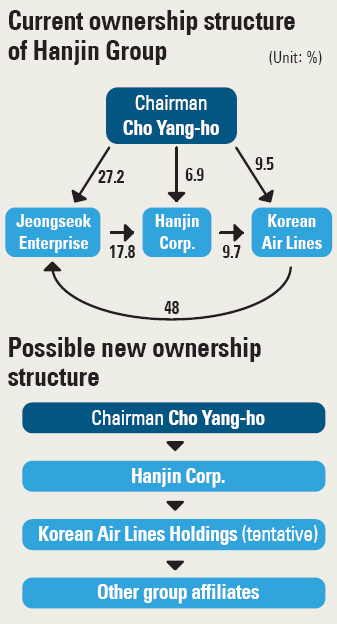 Hanjin Group is considering a plan to split-off Korean Air Lines and create a holding company in a bid to simplify cross-shareholdings among affiliates.

According to industry officials, the group specializing in shipping has been trying move to a transparent management system and the role of chairman Cho Yang-ho.

The nation’s ninth-largest conglomerate in terms of assets said in a regulatory filing Tuesday that nothing has been decided, but analysts expect Hanjin Group to separate KAL, the top subsidiary, into two entities, with one remaining as the flag carrier and another becoming a holding company to control other affiliates.

It was reported that the group already appointed Hana Daetoo Securities and other law firms as advisers. Media reports say the change is expected to be completed this summer.

Hanjin has been ramping up to simplify its group structure since last year, when KAL merged with Hanjin Travel Service.

Analysts foresee Jeongseok Enterprise, a building management company, either merging with Hanjin Corporation or the new holding company to break the cycle of the ownership. But many expect Hanjin will choose the holding company route if it decides to restructure its ownership since it would cost less and allow more efficient control by the chairman.

“Cho may be thinking about the most efficient way to hand over ownership to his son and daughters,” an analyst said on condition of anonymity. “It is a complicated process, but the advantage of restructuring is that Hanjin Group can improve the financial health of its affiliates as they dispose its cross-held shares.”

If Hanjin completes its ownership restructuring with a holding company, it will be the first under the Park Geun-hye administration. Park opposes circular shareholding ownership. Such cross-shareholding structures have been criticized for increasing chaebol families’ control of subsidiaries with only small amount of shares.