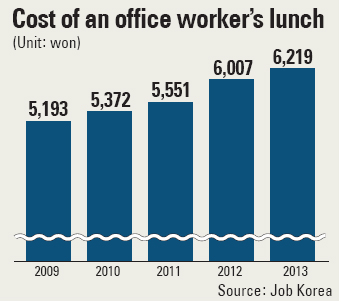 With rising agricultural prices, the cost of an office worker’s lunch has hit a five-year high in 2013, according to a new survey.

The Job Korea Web portal survey of 768 workers found six in 10 said the price of lunch has significantly increased.

Those surveyed suggested that while prices were increasing, serving sizes were not.

Of those surveyed, 94 percent agreed the cost for lunch has increased, with 59.9 percent saying it has risen sharply.

Meanwhile, lunch costs differed by region, with the highest 6,442 won in Seoul, followed by 6,212 won in Gyeonggi and 5,832 won elsewhere.

The survey also asked about serving sizes, with 57.6 percent seeing no change and 41 percent reporting smaller portions. Only 1.4 percent said the amount of food has increased.

In addition, the survey found price was the No. 1 priority for 82 percent of the office workers surveyed.

Most popular for lunch was kimchi stew chosen by 39.3 percent of those surveyed and was the No. 1 dish for the past five years.