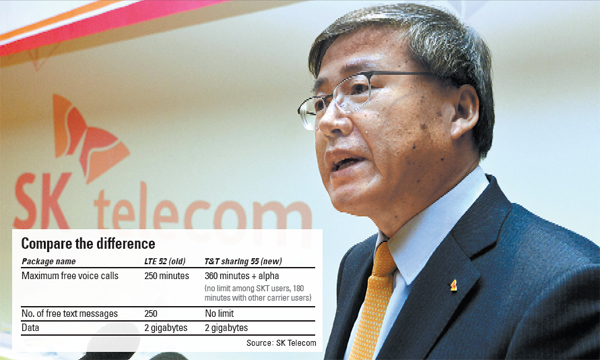 Park In-sik, president of network operations business at SK Telecom, talks at a press conference yesterday at company headquarters in central Seoul. Provided by the company

Amid a chronic yet exhaustive battle among three domestic mobile carriers to snatch more customers from each other with hefty, and at times illegal, subsidies, top player SK Telecom has come up with a groundbreaking mobile plan: free voice calls and text messaging among its subscribers.

SKT said yesterday in a hastily arranged press conference that it would introduce so-called “T&T Sharing” plans for both 2G and 3G, and the most-up-to-date long-term evolution (LTE) subscribers.

KT offers a similar service, but it is limited to LTE subscribers paying at least 55,000 won monthly, and voice calls to other KT users are capped at 3,000 minutes.

An existing smartphone user subscribing to a 52,000 won monthly plan for LTE connection from SKT gets 250 minutes of voice calls, 250 text messages and 2 gigabytes of data. When migrating to a new T&T Sharing plan with a monthly fee of 55,000 won, the subscriber may make unlimited phone calls to other SK Telecom subscribers, plus 180 minutes of calls to users of KT and LG U+. If the length of phone calls with other carrier subscribers exceeds 180 minutes, an additional fee applies.

SKT presumes that a 55,000 won subscriber makes at least 360 minutes of calls per month, and more than half of them are to SKT users, given its market share of about 54 percent. Text messages are free among all subscribers and data at 2 gigabytes is the same as with the LTE 52 plan.

Free text-messaging may deal a blow to hugely popular mobile instant messengers KakaoTalk and NHN’s Line, which smartphone users have enjoyed largely because they are free.

SKT describes the T&T Sharing plan a “paradigm shift” that will take the company away from “exhaustive subsidy competition with rivals” to wage a fresh competition in terms of “service.”

“If mobile carriers stop providing subsidies, consumers get no benefits,” said Park In-sik, president of network operations business at SKT. “But if carriers offer bigger benefits to those subscribers to maintain their loyalty to their own carriers, consumers would refrain from migrating to another, lured by a larger amount of subsidy, and that way, carriers could phase out the amount of subsidies.”

The plan is expected to save Korean households a total of 120 billion won in telecom fees per year, he said.

The outspoken president also made self-reflective comments that may apply to other carriers as well. “It was nice for carriers to establish such a progressive network, LTE. But we failed to unveil innovative services or distinguished price plans that live up to the advanced level of connectivity. That resulted in subsidy competition.”

The unprecedented measure - at least in Korea since Verizon in the U.S. runs a similar service - comes as a surprise for the other two carriers and the media. But the competitors seem to be taking a wait-and-see attitude. “We agree with SKT’s stance that carriers should refrain from subsidy competition and upgrade the dimension of service we offer,” said a spokesman with LG U+, the third-largest player. “But we have no immediate plan to introduce a similar service to SKT’s.”

A KT spokesman said only that the company is considering “various plans to strengthen subscriber benefits.”

But the trend after adopting the plan showed “no visible migration” of subscribers to the leading carriers, he said. SKT has around 26 million subscribers.

Mirroring the fears of SKT losing sales and profits at least in the short term, shares of SK Telecom fell 2.2 percent to 180,000 won yesterday.