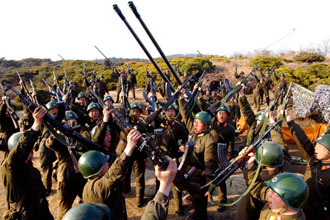 North Korea issued an air raid warning to its civilians yesterday on the day that Key Resolve, the two-week joint military exercises between South Korean and U.S. forces which Pyongyang has criticized as war provocations, successfully wrapped up.

Civilians and military units were warned to take cover in repeated broadcasts yesterday morning from 9:32 a.m. through the North Korean Central Television over television and radio.

The announcer stated that all military units “must quickly take measures to prevent damage from the enemy’s air strikes” but did not specify that the North was under attack. The air raid warning was lifted an hour later at 10:29 a.m. The South’s Ministry of Unification said that the alert was a defense drill.

Military officials here indicate that the drill was likely in response to the deployment of the U.S. B-52 bomber which was flight-tested over the South on Tuesday and on March 8 as well as nuclear-powered submarines as a part of the Joint Command’s simulation exercises. The joint war games in the South that began March 11 ended yesterday at noon while the ongoing two-month Foal Eagle exercises continues until April 30 amid the North’s ensuing war threats and their own large-scale military drills.

The North’s Korean Central News Agency yesterday warned that U.S. bases in Japan and Guam are within range of a “precision strike.” It specified the Anderson Air Force base on Guam “where the B-52 takes off” and “the Japanese mainland nuclear powered submarines are deployed and the navy bases on Okinawa.”

Even as Key Resolve wraps up, the Ministry of National Defense said that the military will continue to remain on high alert.