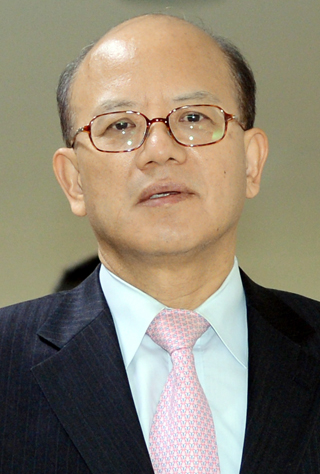 President Park Geun-hye made a nomination for the chief justice of the Constitutional Court, after a former nominee bitterly stepped down due to criticism over his ethics.

Park Han-chul, a 60-year-old justice at the Constitutional Court, was nominated as head justice of the nation’s highest court, announced Yoon Chang-jung, a presidential spokesman, yesterday at a daily briefing.

“The standard for this nomination is basically focused on his expertise and capability,” Yoon said. “Park is currently the highest person in the order of seniority at the court, because he worked for a longer period than any other judge in the court.”

As a native of the western port city Incheon, Park graduated from Seoul National University’s Law Department and passed the 23rd bar exam.

The post of chief justice has remained vacant for more than two months since Lee Kang-kook retired on Jan. 21. Although a senior justice, Song Doo-hwan, is currently the acting chief, he is slated to retire today. In this sense, the nine-member court will have only seven justices for a while.

By law, it is possible for seven justices to make a ruling. But the expectation is high that the court will delay rulings over some important cases which require a consensus of at least six justices.

Under legal procedures, all of the three justices will attend a confirmation hearing by the legislature.

Although two regular justices don’t need approval from the National Assembly, the appointment of the chief justice, a ministerial-level post, requires the approval, which takes longer. If both ruling and opposition lawmakers reach an agreement on the appointment, a vote will be held at a plenary session and more than half of the sitting lawmakers need to vote in favor of the appointment for it to pass.

Lee Dong-heub, the nominee for chief justice who stepped down, abandoned his candidacy after he was grilled at confirmation hearings regarding inappropriate spending of the court’s money for personal purposes.

Despite growing criticism, Lee said in an exclusive interview with the JoongAng Ilbo that he won’t give up his nomination and that the allegations regarding him were groundless rumors.

However, later, he finally said he will step down on Feb. 13 in the midst of political pressure.

The president also reappointed the head of the Small and Medium Business Administration, a state-run organization in charge of assistance for small- and medium-sized companies in Korea. The previous nominee, Hwang Chul-joo, abruptly stepped down on March 18 because he did not wish to give up his holdings in a local engineering company amounting to nearly 70 billion won ($62.9 million).

Under the Korean law, any nominee for high government office or candidates for legislative seats are obligated to transfer their shares into a blind trust before taking public positions.