Vice minister of justice resigns in wake of scandal

Vice minister of justice resigns in wake of scandal 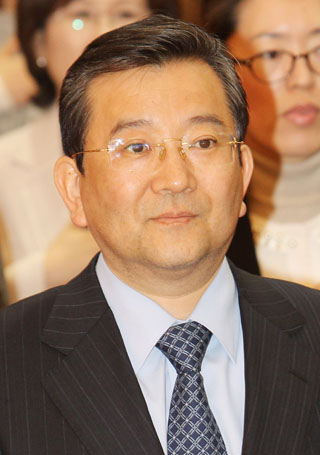 Kim Hak-eui, 57, vice minister of the Ministry of Justice, who has been implicated in a sex-for-influence scandal, tendered his resignation yesterday.

“I decided to resign from the post though such allegations are not true,” Kim said in a statement issued after submitting his resignation at 6 p.m. at the office of the Ministry of Justice in Gwacheon, Gyeonggi. “I don’t want to be a burden to the new administration,” Kim said. “I’m no longer able to perform my significant duties as a high-ranking government official since my real name has been disclosed in some media even before the allegation is proved. I will hold some media outlets accountable for making false reports and regain my honor.”

The National Police Agency (NPA) reportedly secured some crucial testimony yesterday regarding the scandal from women believed to have provided sexual services to Kim.

The police have been investigating the case that involves a 51-year-old contractor surnamed Yoon, who used sexual favors to bribe influential people over two years from late 2009 at a vacation home in Wonju, Gangwon.

So far it is believed that about a dozen women provided sexual services to guests at the villa.

Kim has been identified as one of the men who participated.

According to sources in the police, the testimony came from a 51-year-old, self-employed woman surnamed Kwon who accused Yoon of sexual assault and extortion last year and a female university student, who is believed to have had sex with Kim.

Kim denied the allegation through the Justice Ministry on Wednesday, saying, “I didn’t have sexual contact nor was I filmed having sex.”

As the police have secured testimony regarding the case, they said they have advanced the case from a preliminary investigation into an official investigation. The police judge that the video Yoon filmed is the most crucial evidence.

The police said Kwon handed over part of a two-minute-long sex tape on Wednesday, and the police are currently reviewing it.

Allegedly, the video was on a CD that was found in the trunk of Yoon’s Mercedes-Benz sedan by another man, a private mortgage lender, who is known as an acquaintance of Kwon.

The police speculate that Kwon’s friend edited part of the sex tape that shows the high-ranking official and sent it to Kwon on Kakao Talk mobile messenger.

“It is hard to identify the person in the video as it has been edited a few times and the quality of the picture is very poor,” a spokesman of the police said.

During the investigation, the police obtained Yoon’s nephew’s laptop computer that contained the sex video file and are currently working to restore the deleted file.

The police also banned Yoon, the nephew and a man, who is suspected of providing drugs to the people at the villa from leaving the country on Wednesday.

The police said some of the women testified that they took a stimulant before having sex.

The police also said they discovered additional people who are suspected of receiving sex as well as money and valuables from Yoon.

It added that former high-ranking police officials, incumbent police precinct officials, generals serving in the military based in Wonju, as well as incumbent prosecutors, are suspected of receiving such favors from Yoon.

Since Kim abruptly resigned from his post yesterday, the Blue House couldn’t hide their embarrassment.

“The minister of the Justice Ministry will handle Kim’s resignation,” Kim Haing, spokeswoman of the Blue House said.

Prior to the announcement that Kim was involved in the scandal, the Blue House seemed incredulous that the high-ranking official was involved.

“It doesn’t make sense that an elite prosecutor who aims to be the prosecutor general in the future does such a thing,” an official from the Blue House said.