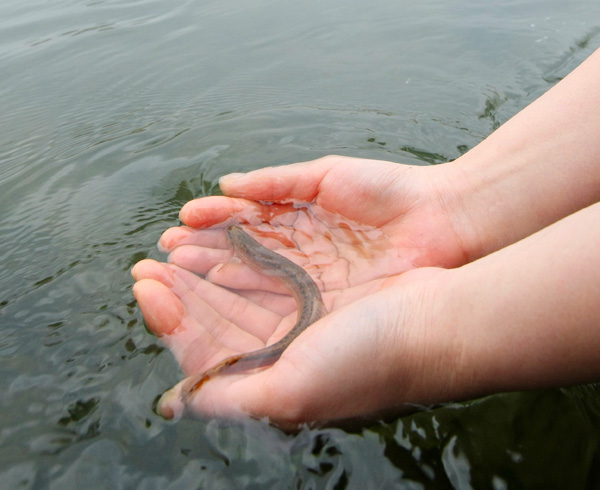 In anticipation of World Water Day today, a volunteer from the Lotte Department Store releases mudfish into the Suseong Lake in Daegu to clean the water and help control mosquito larvae on Wednesday. By Gong Jeong-sik

Kim Jong-gi, who has worked at a sewage treatment facility under the Cheonggye Stream, central Seoul for more than 30 years, still recalls a bone-chilling experience in the 1970s where he saw a dead body floating down the underground system.

“The drainage system in the sewage disposal facilities was so poor that in the monsoon season, it didn’t even have the capability to filter a dead body in the sewage treatment process,” the 67-year-old said.

With the 21st World Water Day today, Kim’s tale reflects how much the Korean sewage system once lagged behind and, at the same time, highlights the progress it has made.

Now, Korea is helping 12 countries around the world, including Vietnam, Mexico, Myanmar and Laos - set up a framework to create sewage disposal systems and restore polluted streams in those regions.

Korea’s Ministry of Environment and Korea International Cooperation Agency are cooperating with their Indonesian counterparts to restore the heavily polluted Ciliwung River between the Istiqlal Mosque and the Pasar Baru market in Jakarta, drawing on their experience refurbishing the Cheonggye Stream into an urban recreation area.

The 10 billion won ($9 million) restoration project will include the construction of a water treatment system next to the mosque.

“We won a $500 million deal with Algeria in 2011 to construct water and sewage treatment facilities and restore the El Harrach River,” said Kang Seok-woo of the environment ministry, referring to the project led by construction company Daewoo Engineering & Construction.

The renovation project will concern a stretch of around 18 kilometers (11 miles) with the aim of making up for decades of inactivity, which has caused significant pollution in Algiers.

“The Korean government will keep boosting overseas expansion in the environment industry through this kind of cooperation,” said Kang.

Korea appears to appeal to a number of developing countries due to its history of fast-paced development.

Only 20-30 years ago, the state of the water management system might be no different from that of many developing nations.

However, the water supply ratio in 2011 reached 94.6 percent and the sewer system rate 90.9 percent.

“The developing countries would like to select a country that can offer practical advice tailored to developing nations when choosing a partner for the water management system. Korea has the upper hand because it has already been there,” the professor said.