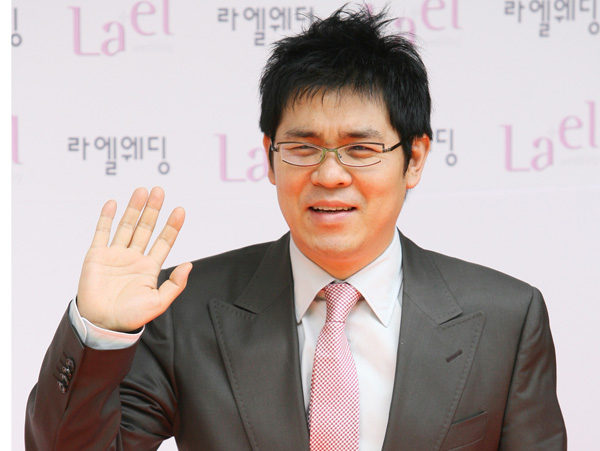 Kim Yong-man, 45, one of the country’s top comedians and emcees, has been accused of gambling at illegal sports Internet betting sites for years.

The Seoul Central Prosecutors’ Office said on Wednesday it summoned Kim on late Tuesday evening and confirmed that Kim has bet about 1 billion won ($895,000) at two or three illegal sports betting Web sites since 2008 after questioning.

The prosecution said Kim has admitted to most of the allegations.

“I started gambling at illegal betting Web sites with my manager as a hobby, but couldn’t quit and lost hundreds of millions of won,” Kim was quoted as saying.

Prior to the investigation, the prosecution summoned Kim’s manager Yang, 42, for the same allegation.

The prosecution said Kim and Yang have spent tens of millions of won per month betting on game score results of professional football matches in international leagues, including the English Premier League, betting anywhere from hundreds of thousands of won to millions of won per game.

Kim and Yang were discovered by the prosecution, which has been investigating operators of illegal Internet sports betting.

Prosecutors have booked three Internet betting operators, including a man surnamed Kim, 34, without detention and are currently investigating them.

The prosecution estimates that about 11 trillion won of illegal bets have been made at about 1,000 Internet betting sites annually.

“We can’t accurately assess the scale of illegal private betting as most betting Web sites often change their IP addresses and servers and newly appear every day,” a spokesman for the prosecution said.

According to the Korean Institute of Criminology, the total stake of illegal sports betting is six times larger than the total stake of Sports Toto at 1.9 trillion won, the only licensed betting service in Korea, which allows people to make bets on the outcome of a sporting event.

The prosecution will likely book Kim without detention as he has admitted to most of the allegations.

“I will have time for self-restraint and self-reflection on my behavior,” Kim said through a press release yesterday.

Kim stated that he will quit MBC’s “Section TV Entertainment News,” where he was an emcee for 12 years, as well as four other TV programs, including KBS’ health variety program “Vitamin” and JTBC’s “Doctor’s Game.”

“We are considering casting a new emcee for the program after we were informed about his decision,” a spokesman for MBC said.