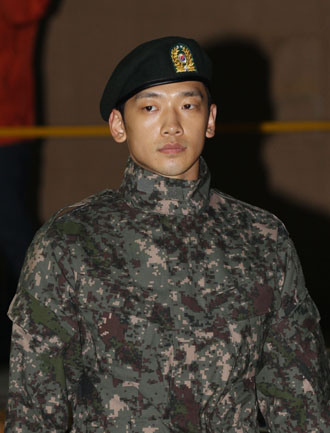 Singer and actor Rain, whose real name is Jung Ji-hoon, again did not comply with a court order compelling him to appear as a witness in a hearing on Wednesday for a libel trial against a businessman surnamed Lee.

Rain refused to attend the hearing as he is currently serving his mandatory military duty, according to local media reports. It was also said that he feels uncomfortable making public appearances after his relationship with actress Kim Tae-hee went public.

This is the third time the singer did not comply with the court order.

Seoul Central District Court will summon him once more. It is also considering a summons after he is discharged from the military in July.

Rain filed a defamation lawsuit against businessman Lee in 2010 and two journalists who used Lee as a source. The articles said Rain colluded with the president of a fashion company and embezzled company funds.

Later, Rain dropped the charges against the reporters but is still pursuing the case against Lee.