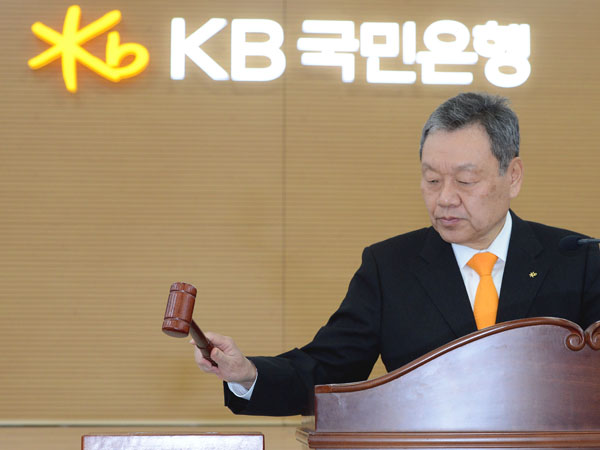 Despite recent advice from a global investment advisory firm to not appoint some outside directors of KB Financial Group, major shareholders of Korea’s second-largest lender yesterday approved the plan initially proposed by management. The outcome is expected to provide a breather for the financial institution and Chairman Euh Yoon-dae.

KB Financial Group held its fifth general shareholders’ meeting in Yeouido, western Seoul, and approved the appointment of eight outside directors, including Lee Kyung-jae, Bae Jae-wook and Kim Young-kwa, against the advice of U.S.-based Institutional Shareholder Services (ISS), a subsidiary of Morgan Stanley.

According to reports, ISS released a report advising foreign investors to reject the appointment of Lee, Bae and Kim, noting they had caused chaos among KB Financial Group’s leadership by opposing the plan to purchase ING Life Insurance last year.

The project to acquire ING Life Insurance was led by Park Dong-chang, a close associate of Euh, who was dismissed from the vice president post earlier this week for allegedly misleading ISS about the substance of the report. Park was found to have met with ISS analysts recently in Singapore and Seoul, raising suspicions that he leaked distorted information to damage the three outside directors.

Yesterday, holders of some 355.4 million won ($317,505) in shares of KB Financial Group, 92 percent of the total, attended the meeting and 66.5 percent agreed on the appointment of the outside directors, according to KB Financial Group officials. They are Lee Kyung-jae, former chief of the Industrial Bank of Korea; Bae Jae-wook, a lawyer; Kim Young-jin, a professor at Seoul National University; Lee Jong-chen, a professor at Soongsil University; Koh Seung-hee, a professor at Sookmyung Women’s University; Lee Young-nam, chief executive of EZ Digital; Jo Jae-mok, chief executive of Ace Research Center; and Kim Young-kwa, an adviser at Korea Securities Finance Corporation. The term for the reappointed outside directors will be one year, except for Kim Young-kwa who will have two years since he was newly appointed.

Yesterday’s outcome comes amid concerns being raised over deepening internal strife at KB Financial Group under Euh, who became chairman in 2010 during the Lee Myung-bak administration. He is considered to be a close associate of the former president. Euh is known to have handpicked Park in the same year with the aim of diversifying the group’s business portfolio, which later involved the attempt to acquire ING Life Insurance. The board, however, rejected the group’s takeover bid in December, saying financial soundness was more important than diversification amid times of economic uncertainty.

“In regard to appointing outside directors, it is a misunderstanding that there was internal discord,” Euh told shareholders yesterday. “Some of the information provided in the ISS report has been distorted.”

According to Bloomberg, the ISS said in its release that “political changes appear to be placing unnecessary risks at the company and making its strategic direction uncertain, possibly due to some of the directors’ close relationship with the government.”

KB Financial Group has denied any involvement by Euh. In a statement Monday, KB Financial said its chairman “had nothing to do with the alleged scheme” by Park and he was “unaware” of it.

The labor union of KB Financial, however, yesterday urged Euh and other executives to step down to take responsibility for the recent internal strife.

“Chairman Euh has put a scar on KB Financial Group’s value,” the union said in a statement, urging that the management should have new leadership by the end of this month. It raised doubts about the board’s transparency and fairness in governance structures.

Even before the internal conflict involving Park and the ISS, Euh had been pressured to step down before his term ends in July in light of the new Park Geun-hye administration. During the former Lee government, many appointments in the financial sector included close associates of Lee, including Euh and Korea Development Bank Chairman Kang Man-soo. There was criticism of the so-called “parachute appointments,” which the new Park administration pledged to avoid.