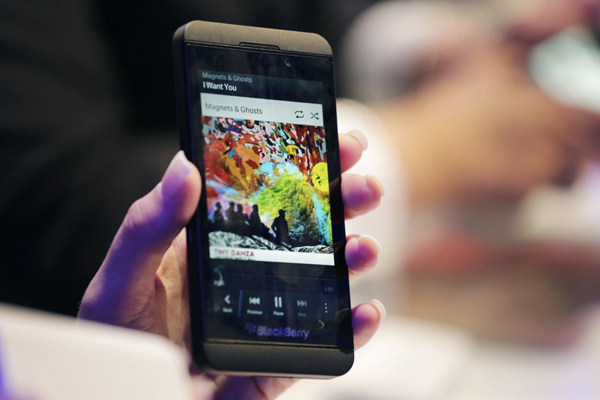 The BlackBerry Z10 smartphone is displayed in New York in this Jan. 30 photo. [AP]

BlackBerry’s new Z10 smartphone finally went on sale in the United States yesterday, almost two months after its debut in other countries, putting the company’s turnaround plan to the test in its largest market.

Chief Executive Officer Thorsten Heins kicked off U.S. sales of the touch-screen device at a theater in New York’s Times Square. The event, which featured performances by rapper Ludacris and R&B singer Janelle Monae, marked the arrival of the Z10 at AT&T stores. The phone will be offered by Verizon Wireless on Thursday.

A lot of hard work has resulted in the “culmination of selling a fantastic device in the U.S.,” Heins told those gathered at Best Buy Theater.

Heins is trying to reverse BlackBerry’s fortunes in the United States, where the onetime smartphone leader has lost ground to Apple’s iPhone and Google’s Android. Sales in the country fell by almost half to $520 million in the third quarter from a year earlier, through the United States still accounts for about a fifth of revenue for Waterloo, Ontario-based BlackBerry.

“There’s no risk of overstating the importance of the United States for BlackBerry,” said Ramon Llamas, an analyst with IDC in Framingham, Massachusetts. “It’s such an important bellwether market.”

AT&T, the second-largest U.S. carrier, will offer the Z10 for $199.99 on a two-year contract, putting it at the same price level as the main iPhone. The phone was unveiled on Jan. 30, and it’s been available for weeks in the U.K., Canada and other markets. Heins has attributed the U.S. delay to longer equipment-testing procedures of American carriers.

Early demand suggests the Z10 will perform as well in the United States as in BlackBerry’s home market of Canada, Chief Marketing Officer Frank Boulben said.

“I expect that we’re going to hit the ground running,” he said, citing “substantial pent-up demand.”

The United States will add to the phone’s global footprint, Boulben said. By the end of April, BlackBerry expects the Z10 to be available from 150 carriers around the world. By this time next year, there should be six BlackBerry 10 models on the market, he said.

“It’s not a one-trick pony - neither from a country standpoint nor a device standpoint,” Boulben said.

The rollout of the new phones is supported by the biggest marketing campaign in the company’s history. As part of the blitz, BlackBerry splurged on a Super Bowl ad in early February, betting it could build excitement even though a U.S. debut wasn’t imminent.

BlackBerry, long popular with corporate clients, has tried to project a more artistic image with the new products.