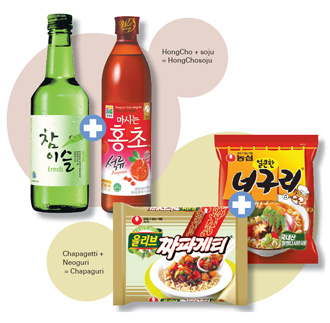 The mix and combination trend has been a boost to sales of food companies.

As consumers increasingly mix one food product with another to make a new dish, sales of food manufacturers that produce related products have risen significantly.

The prime example is Chapaguri, which is made by mixing Nongshim’s Chapagetti, which comes with black bean sauce, and its spicy instant noodle product Neoguri.

It has become hugely popular among Korean consumers since being introduced on an episode of the TV show “Dad, Where Are You Going?” last month. Inquires about the recipe and reviews flooded the Internet.

According to Nongshim, the country’s largest food producer, sales of Chapagetti and Neoguri jumped 30 percent at large discount store chains the week after the program was broadcast.

“The ramen products that have been loved by consumers for 30 years are newly spotlighted and emerging as trendy foods with an exotic recipe. We hope to see continuous positive responses from consumers,” said a spokesman for Nongshim.

With the tremendous popularity of Chapaguri, E-Mart introduced the recipe in six steps with pictures in the ramen sections of its stores.

Chapaguri initially became known in 2009, when a college student publicized a recipe on a blog.

Today, netizens are disclosing their own recipes for Chapaguri through SNS, such as blogs and Twitter.

Nongshim’s shipments of Chapagetti rose 87 percent for the two weeks since the broadcast was aired compared to the same period last year; Neoguri was up more than 50 percent.

In some large discount stores, wholesalers and retailers, Chapagetti was sold out a week after the broadcast, forcing Nongshim to operate its production line at full capacity during weekends and holidays.

In addition to Chapagetti and Neoguri, the mixing and combination trend applies to other foods and drinks as well.

Another product that benefited from the trend is Daesang ChungJungOne’s red vinegar brand HongCho.

HongCho is red vinegar often diluted by water for drinking, as it was believed to promote health and beauty. But recently it has become popular to mix it with soju.

HongChosoju’s sour and sweet alcohol taste is most preferred by young people and women. As it is also light red, it is popular with couples.

Thanks to this combination, sales of HongCho have been high. ChungJungOne reported that three million mini HongCho products were sold last year on the back of HongChosoju’s popularity.

“Some bars in Gangnam and college towns, where young people gather, are introducing HongChosoju on their menus,” said a spokesman for Daesang ChungJungOne.

The mix and combination food trend is expected to continue with a series of TV programs airing new recipes.