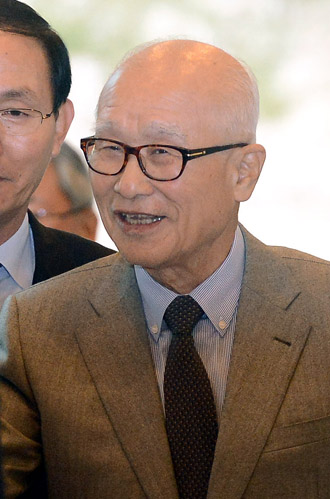 Kim Woo-joong, former chairman of Daewoo Group, appeared at the 46th anniversary ceremony of the group held in central Seoul yesterday, his first official appearance since the Park Geun-hye government was inaugurated.

Kim arrived in Seoul on Thursday from his home in Vietnam, and some see his visit as a sign the 78-year-old business mogul might make a comeback. According to sources, Kim was in Korea frequently in recent months for meetings with business leaders.

Executives of the former Daewoo Group gather twice a year as an expression of unity, the sources said.

Kim’s visit is particularly significant because many former Daewoo Group executives are working for the Park government.

Lee Han-goo, floor leader of the ruling Saenuri Party, was former president of Daewoo Economic Research Institute. Baek Ki-seung, an aide to Park, was a PR executive at Daewoo Group.

Daewoo Group owned 13 affiliates, including an electronics unit, and entered a debt workout program in 1999 after the Asian financial crisis. The group sold unprofitable units such as semiconductors and focused on a few key products like washing machines and refrigerators.

Kim was sentenced to eight years in prison in 2006 after being convicted of accounting fraud. He also was fined 17.9 trillion won ($16 billion). But he was given a special pardon in January 2008.

Kim founded Daewoo with 5 million won in capital and five employees in 1967. Five years later, the company was the second- largest exporter in the country. Daewoo acquired Tong Yang Securities in 1973 and Sambo Securities in 1983 to be merged into Daewoo Securities. It also bought Daewoo Electronics in 1974. However, such aggressive expansion was the seed for the accounting fraud and bankruptcy of the group, according to market watchers.

Since 2000, Kim has spent most of his time in other countries, and there were rumors he was trying to avoid charges related to the bankruptcy of the group. In an interview in Thailand, he said the former Kim Dae-jung administration forced him to leave the country.

During trials in 2005 and 2006, it was also discovered that Kim had obtained French citizenship.

According to sources, Kim has formed a close network of business figures and high-ranking government officials in Vietnam. Some say he even has a plan to start a business in the country as well as in France.