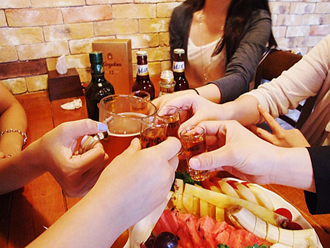 Office workers in their 30s and 40s choose chatting on messenger and drinking as the most common ways to reduce work-related stress.

Hite Jinro’s whiskey brand Kingdom surveyed 650 employed workers in their 30s and 40s online on the subject of office stress and how they relieve it.

According to the survey, workers drank beer most often when drinking to relieve stress, followed by soju, poktanju, or Korean boilermakers, wine and whiskey.

As for the cause of stress, extra duties, such as working overtime or working on holidays, ranked first at 42 percent. Others included senior colleagues’ nagging at 32 percent and ignorance or obstinance of junior colleagues at 12 percent, implying that they get more stress from their senior staff.

For how they relieve their stress at work, 28 percent said they backbite others on messenger, and for how they get over stress after work, 35 percent replied that they drink with coworkers or friends.

Following the drinking, going to sleep early was the second most common with 17 percent, followed by exercising at 14 percent, binge eating at 9 percent and watching movies at 6 percent.

In addition, for the most stressful day of the week, 57 percent of those surveyed picked Monday, while 5 percent said Sunday.

“We conducted the survey to learn about the biggest stress factors of workers and the commonly used methods to reduce them,” said a spokesman for Kingdom.

“Drinking could be a way to relieve stress, but excessive drinking during weekends could lead to the second stress of the so-called Monday Syndrome, so moderate drinking is preferred.”