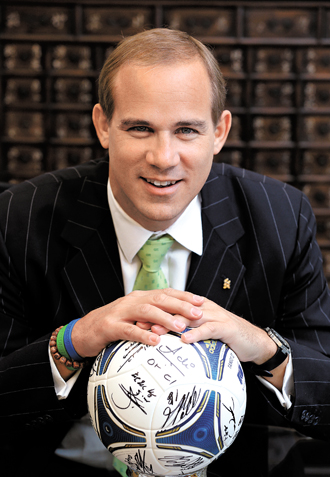 Footballers call the Korea Football Association (KFA) the control tower of Korean football. Along with the president, five vice presidents are the core commanders of that control tower.

Richard Hill, 48, president of Standard Chartered Bank Korea, is one of them.

Considering that football usually demonstrates exceptionally strong nationalism and regional exclusivity among other sports, it is very unusual for a foreigner to be tapped vice president of the football association.

The JoongAng Ilbo met with Hill at the SC Bank Korea’s headquarters Monday. Hill first became associated with Korean football in 2011 as SC Bank Korea sponsored the professional football federation K-League’s youth development program. Since September 2011, Hill served as the outside director of the K-League.

He was not just the outside director in name only. When the meeting of the board of directors was held, Hill requested the agenda be translated into English and sent to him in advance, and actively stated his views by hiring an interpreter.

When the new President Chung moved to the KFA from president of K-League, Hill went from being the outside director of the K-League to KFA vice president.

“When I was invited to join the KFA, I didn’t think twice about it. I have been living in Korea for six years, since I came to Korea in January 2008. I have lived in many countries, including Greece, Italy and Singapore, but I have been dwelling in Korea for the longest period and living happily with my family. I wanted to contribute to Korean society,” said Hill.

Hill went on to praise football.

“The increasing number of children playing football is a great help in the development of a society. Zinedine Zidane of the French football team, which won the 1998 France World Cup, is a descendant of Algerian immigrants. Patrick Vieira is also of African descent. Although there were many social conflicts in French society caused by immigrants, all the French people coalesced for the World Cup to cheer the French team. In Korea, where the number of multicultural families is increasing, I am convinced that football would be a great help for the social integration,” he said.