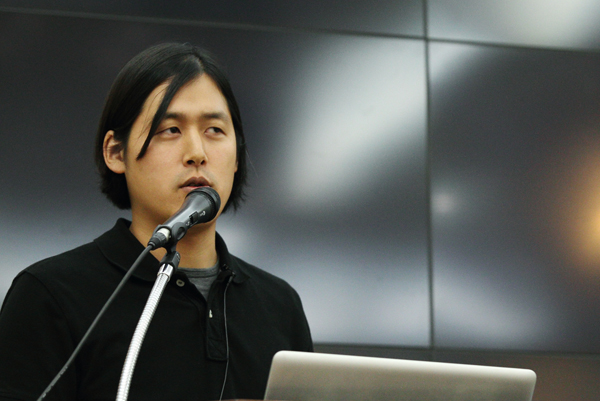 Academy Award-winning software developer Theodore Kim was greeted by a loud cheer from students Wednesday as he stepped into an auditorium to give a lecture at Seoul National University’s College of Engineering.

In February, Kim and three colleagues snagged an Oscar for technical achievement at the 85th Academy Awards at the iconic Beverly Hills Hotel for their collaborative role in major motion pictures including “Super 8,” “Avatar,” “Life of Pi,” “Alice in Wonderland” and “Sherlock Holmes.”

The 37-year-old assistant professor of media arts and technology at the University of California, Santa Barbara, who obtained a Ph.D. in computer science at the University of North Carolina, Chapel Hill, was among the 25 recipients honored for this year’s Scientific and Technical Award from the Academy of Motion Picture Arts and Sciences.

Kim along with Nils Thuerey, Markus Gross and Doug James were awarded for their invention of Wavelet Turbulence software, a simulation method that portrays smoke and fire effects.

The software has been used in over 26 Hollywood movies and most of the action and sci-fi films since 2009, including “Iron Man 3” and “Man of Steel.”

Wavelength turbulence can synthesize details to cover smoke, fireballs and volcanic eruptions to give it them a realistic finish quicker and cheaper than before. The technique can be applied to large-scale explosions like the train crash scene in “Super 8” or the Navi forest burning up in James Cameron’s “Avatar.”

Academics rarely receive the award, and Kim is the first sitting faculty member of his university to receive an Oscar.

During the lecture, Kim told students that Pixar’s computer-animated “Toy Story” in 1995 was the movie that inspired him to pursue innovation in the film industry.

And today, his program has been used in hugely popular animations like “Shrek” and “Megamind.”

Born to Korean parents in the United States, Kim was influenced by his father, a graduate of SNU College of Engineering to pursue computer engineering.

He developed the software with his colleagues as a doctoral student at Cornell University in 2008, and they released the program for free download.

It quickly gained momentum the following year as Hollywood producers praised how it shortened the weeks-long process of rendering of smoke to just several hours.

Kim said he plans to take the existing technology and extend it to advance rendering of waves and tsunamis.

“Even as I was studying computer programming, I had a wish to become an artist,” the Oscar-recipient said. “Movies are a wonderful genre in which those two elements can merge.”