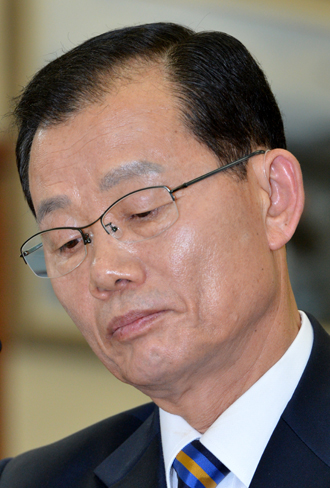 Buckling under mounting pressure to step down for hiding stock ownership in a foreign oil company, among other things, Kim Byung-kwan, the Park Geun-hye cabinet’s defense minister nominee, unexpectedly tendered his resignation yesterday.

The 64-year-old army general voluntarily stepped down 38 days after his nomination on Feb. 13 as minister of national defense, despite showing no previous indications of giving up even after fresh allegations this week that he held hidden stocks in an oil company based in Myanmar.

The main opposition Democratic United Party on Wednesday revealed photos from 2011 of Kim visiting the Korea Myanmar Development Company, an overseas resources developer that won major offshore exploration contracts in Myanmar and is suspected of receiving special treatment during the Lee Myung-bak administration.

The trip was four months before Kim purchased the stocks at the company in May 2011, and DUP lawmakers accused Kim of lying about having made previous contact with the company.

Kim originally denied the allegations of holding stocks at the company in his confirmation hearings.

Kim made a public apology yesterday, stating he is “stepping down as defense minister nominee to help normalize government affairs.”

The former four-star general, who served as the deputy commander of Korea-U.S. Combined Forces Korea in 2006-8, had been staunchly resisting pressure by opposition lawmakers to bow out after being grilled over his well-paid job as a consultant for a local arms broker, which was involved in a controversial project to import faulty German tank parts for the Korean Army.

He was also accused of real estate speculation, tax evasion and taking bribes.

Kim failed to win confirmation at his hearing at the National Assembly two weeks ago as opposition lawmakers deemed him unqualified due to such ethical lapses, though the president can override the decision.

As for Kim’s replacement, the Blue House yesterday said that the current Minister of National Defense Kim Kwan-jin will continue at the post, which the former army general has held since December 2010 under the Lee Myung-bak administration.

“As the nation’s security crisis has exacerbated following the recent consecutive provocations from North Korea and the cyberattack on broadcasters and financial institutions,” said Kim Haing, a presidential spokeswoman, “President Park determined that the country and the people’s safety are too critical to be imposing further delays with political arguments and confirmation hearings.”

“Park decided to have Minister Kim, who has shown level-headed leadership in national security, remain in office to restore stability in the security crisis and ease the anxiety of the people,” the spokeswoman added.

The defense minister pledged yesterday at a press briefing immediately after his extended appointment to “thoroughly persevere our military readiness” and to be “rightly devoted to the current security situation.”

Kim Byung-kwan’s resignation is the latest among a string of Park ministerial appointees to step down, coming a day after Kim Hak-eui, the new vice minister of the Ministry of Justice, who was implicated in a sex-for-influence scandal, resigned.

On Monday, businessman Hwang Chul-joo, nominee to head the Small and Medium Business Administration, abruptly stepped down because he did not wish to give up holdings in Jusung Engineering. And earlier, Kim Jeong-hun, Park’s nominee to head the new Ministry of Future Planning and Science, and prime minister nominee Kim Yong-joon also withdrew.

The DUP stated that Kim’s resignation was an obvious, if not delayed, choice. Kim Hyun, a DUP spokesman, said at the National Assembly, “Kim’s resignation is a huge disaster and the result of President Park’s ‘personal pocketbook appointments,’ and she should immediately apologize to the people.”