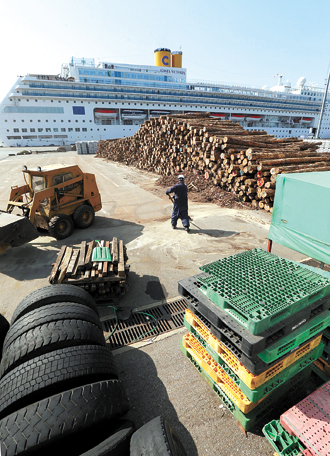 The five-star cruise liner Costa Victoria docks at a freight wharf in Incheon Port on Thursday. By Ahn Seong-sik

The luxury cruise liner Costa Victoria of the Italy-based ship operator Costa Crociere arrived at Incheon Port carrying some 1,900 passengers, 90 percent of whom came from China.

Despite the regal, imposing presence of the five-star ship, however, it docked at a cargo wharf flush with stacked wood, iron and tires. The throng of travelers had to navigate the materials to make it on shore.

The contrasting scene is the result of the absence of a passenger terminal at the port. The drastic rise in cruise arrivals there only underlines the need for a dock designated for cruise ships.

So far this year, a line of cruise ships carrying international travelers entered Incheon port at intervals of one ship every two to three days, something that never happened before.

On March 12, the port saw a dual call by two cruise ships for the first time in its history.

If the trend goes on through this year, the number of cruise ships will be estimated to Incheon at around 110 and cruise passengers 120,000, according to the Incheon Port Authority, a state-owned enterprise in charge of the management of Incheon Port.

This is a dramatic increase compared to a mere eight visits last year and 31 in 2011, the port authority noted, adding that the figure never surpassed the 20 mark before 2011.

“The vast majority of cruise visitors are wealthy Chinese, which shows their improved standard of living,” said Ahn Ghil-seob, a director of the public affairs office at the Incheon Port Authority.

“Japan used to be a popular spot for cruise tourism, but the Chinese turned their backs on Japan after the 2011 Fukushima Daiichi nuclear disaster and heightened territorial disputes between the two countries,” Ahn said.

Their new destination appears to be struggling to fully accommodate them. Without a cruise terminal, most cruise ship passengers can stay about 12 hours here in Korea.

The Port of Busan has a dock for cruise liners, but many prefer the one in Incheon due to its proximity to Seoul. Fortunately, Incheon Port plans to build a dock specifically for passenger ships, but not until 2016.

Many tourism industry insiders see the lack of a cruise port as a missed opportunity.

“If we truly want to tap into the growing number of Chinese tourists, we should build a passenger terminal so that they can stay longer,” said a representative of a cruise ship tourism company.

But the port authority says the project will proceed as planned.

“This is a project carried out in cooperation with the government, so we cannot change the schedule, as much as we’d like to,” Ahn of the state company said.